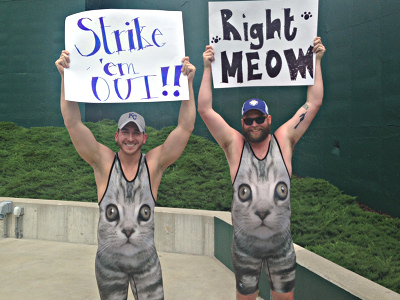 The Royals will bring with them to Wrigley Field a recent AL pennant, a slew of young and exciting talent, and one of the crazier fan bases you’ll experience. I really hope the cat unitard guys – pictured right – make the trip.

The Cubs are in a bit of a tough stretch, having dropped a couple straight series, and fallen to 25-21, 5.5 games behind the Cardinals, and out of a Wild Card spot for the first time in a while.

The Royals are a top three team in all of baseball by run differential, and are tied for the third best record in baseball at 28-18. They’ve dropped four in a row, though, and were just swept by the Yankees.

On the flip-side, the guy whose spot in the order Coghlan took for that Scherzer game, Dexter Fowler, is in a bit of a mini slump, with just one hit – albeit a homer – and no walks in his last four games. Since May 8, though, the guy is hitting .243/.357/.529, also with a mere .250 BABIP. I think we’re going to see the Cubs’ offense with a really nice stretch soon.

The last time out, Jeremy Guthrie gave up 11 runs in the first inning against the Yankees. Cubs would take that.

You know how most teams you want to try and make the starting pitcher labor so you can get into the middle relief part of the bullpen? Yeah, not so much with the Royals. Greg Holland hasn’t been himself this year, but otherwise, the Royals’ bullpen has been nails. Stay. Away. Score runs on the starter.

I keep waiting for some team to blow up Edinson Volquez. Maybe it’ll be the Cubs.

The Royals have six regulars with above average overall offensive numbers. Alcides Escobar is not one of those players, nor does he have one of the better OBPs on the team, and yet he leads off consistently. Boom, Yost’d.

Kendrys Morales has been crushing this year, but he has exclusively played DH this year, so the Cubs might catch a break.