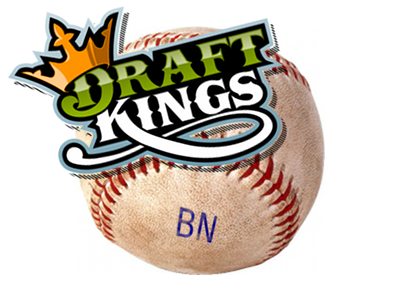 [Tomorrow, DraftKings is holding a $300,000 one-day fantasy contest. One participant from BN will win a signed Jorge Soler bat, and three others will win BN shirts. Plus, you know, there’s the $300,000 in cash prizes part – overall winner gets $100,000. Sign up here, which supports BN. Full details here.]

So, I’m not eligible to win the signed Jorge Soler bat, and I won’t take any of the BN shirt prizes away from you guys. But I can still win some cash in tomorrow’s big contest – plus, it’s fun to play and beat you guys. I could do a lot of things with $100,000. So I’m playing.

I’ll tinker with my lineup probably right up until game time tomorrow night, but my first pass looks pretty good:

So, obviously I’m light on starting pitchers for this one, which I normally hate to do – they are disproportionately able to rack you up some points, but the starters for tomorrow’s games are pretty thin. So, I’ll go with a couple match-up starters I like – Matt Moore is coming back from TJS, but he gets the Phillies tomorrow; Ian Kennedy seems like he’s due for some positive regression.

I saved most of my money for Harper/Trout/Rizzo, the latter of which isn’t so much a homer pick as it is a homer pick (that is to say, the home run kind of homer – I like Rizzo against Lorenzen, who’s given up a ton of homers, playing in Great American Ballpark). Todd Frazier at third base proves I’m not just being a homer. (Apparently Yasmani Grandal took a foul ball off the mask and left today’s game moments after I set my initial lineup, so I’ll have to monitor that one. (UPDATE: And, just like that, I swapped in Kyle Schwarber for Grandal. Just in case.))

And, of course, if you want to play, too, sign up here. Just by signing up through that link (new users), you have a chance to win the signed Soler bat, and, if you finish in the top 3 of BN’ers, you’ll win a BN shirt. Full details here.