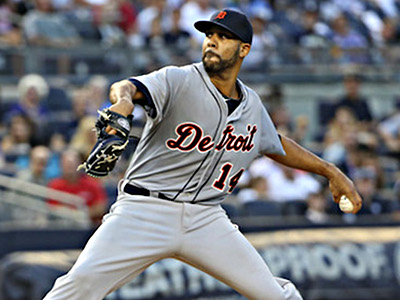 Just a day after word broke that the Detroit Tigers were likely sellers, including ace lefty David Price, there’s word that the Chicago Cubs may be interested in a trade.

Bruce Levine reports that the Cubs “were among the first” teams to reach out to the Tigers about Price’s availability. Although Levine says that as many as eight teams are checking in on Price, the Cubs and Tigers are already scouting each other’s systems, according to Levine, to see if a deal can be struck.

Now, then. Let’s unpack this a bit.

At a primary level, I know how most of you are reacting, shifting in your seat, barely able to temper your excitement. And, indeed, Price is a fantastic pitcher whose presence would make any team much better. But let me offer up some tempering:

(1) This time of year, the bar for “scouting other teams” and “checking in with other teams” and “considering deals” is pretty low. With only a handful of days left before the Trade Deadline, teams consider almost every avenue and explore almost every option, at least a little bit, before they run out of time to make a move. I have no doubt that the Cubs’ front office has, or will, at least check in on Price, just like they’ll check in on virtually every available starting pitcher. It’s a known need for the Cubs, and this front office is very good at their job.

(2) I’ll stay open to being sold on anything, but I still don’t think the elite tier of rentals is the right fit for the Cubs – a team realistically going for the Wild Card. Yes, making the Wild Card Game has value, even if the Cubs bow out. And, yes, having another ace in the rotation helps the Cubs get to that game, and then helps a lot in the playoffs if they manage to win it. But it seems like teams that are clearly in a divisional race would be willing to part with a greater acquisition cost to get Price. For the Cubs, I see a mid-tier rental as more realistic, and maybe more palatable. Then we can talk about Price again when he reaches free agency in a few months.

Speaking of that part, I know that some of you will offer this: “But if the Cubs trade for Price now, they’ll have the best shot at signing him. Maybe they could even negotiate for a window to sign an extension before a trade is consummated.”

The first point is correct: if the Cubs traded for Price, they probably would have a slightly better shot at signing him to a massive contract than other teams. But what is that really worth? How much is it worth having a slightly better shot to sign a $200 million pitcher when the market is going to be flush with pitching options? Even if Price is the preferred target, is paying extra in prospects now worth that slightly increased chance of signing him? Again, when you stack it against a market that’s going to have lots of options? And when you consider that Price, himself, may well be set on exploring free agency no matter what?

And that addresses the second point: the extension negotiation window. For a big-time free agent-to-be like Price, I have an extremely hard time believing that he’ll sign an extension with a new team in the middle of a season when he’s just a few months away from free agency, especially when he’s given just a few days to think about it. Consider how long it takes most big-time free agents to make a decision – a decision that affects the biggest, longest contract of their life, and where they’ll play for the next six/seven/eight years. Maybe Price is dead set on coming to Chicago (he’s hinted at it in the recent past), but I don’t think you can count on that in-season.

In other words, in this case, I don’t think negotiating an extension is realistic.

So, if the Cubs were to trade for Price, then, you’re left with what it really is: a two-month-plus-playoffs rental for an elite starting pitcher. Price, who turns 30 next month, has been fantastic this year, and has seen his velocity stabilize in the last three years after a bit of a decline in his late-20s (happens to everyone). Moreover, he’s figured out how to be extremely effective without the extreme velocity of his youth (not that he doesn’t still throw pretty darn hard at 92-94mph). I think Price is great. Don’t get me wrong about any of this. I just question whether the acquisition cost – think multiple prospects in the Cubs’ top five, plus more – is the right use of resources. It might be. It might not be.

A rented starter might make 11 or 12 starts for the Cubs before the end of the season. The difference, over those starts, between a – just as examples – David Price type and a Mike Leake type is not as much as you might think. The acquisition cost (because other teams will be expecting to be able to use Price at least one in a divisional playoff series) might be a significant difference, however.