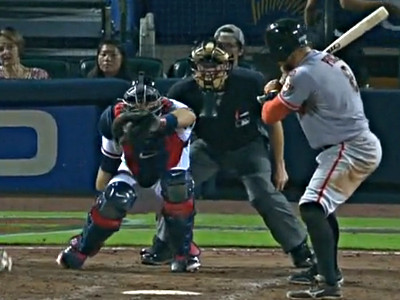 Chicago Cubs fans – baseball fans? – have a certain relationship with Atlanta Braves catcher A.J. Pierzynski. The 38-year-old backstop has developed something of a reputation over his many years in the league, and, particularly because of his time spent with the White Sox (eh hem), Cubs fans seem not to care for him too much. Even as recently as a couple weeks ago, when he seemed to go far out of his way to disturb Jon Lester during his no-hit bid (and then stare Lester down when he broke it up), Pierzynski grinds Cubs fans’ gears.

So, it is with some trepidation that I share a couple … gulp … really awesome things he did last night. I mentioned the first earlier today in the fill-in EBS, when Pierzynski’s Braves beat the Giants, knocking them a half game behind the Cubs in the Wild Card race. With two outs in the 9th and the Braves down two, Pierzynski drilled one deep to tie it:

That’s all well and good, and, as I said, it helped the Cubs. So bully for A.J.

But what he did the inning before is what really compelled me to share some love with you. On a bouncing pitch in the dirt – one that landed a good five feet in front of home plate – Pierzynski put his catching skills to work … by trying to frame the pitch:

Say what you will about Pierzynski – and you probably will – but that was funny. It took a little skill, too. Even pitcher David Aardsma seemed to appreciate the joke, and Hunter Pence looked slightly confused.

I really enjoyed that.