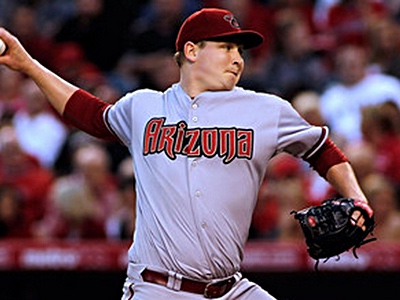 Even as September approaches, you can’t have too much depth.

The Chicago Cubs have signed righty Trevor Cahill to a minor league deal, and immediately goes on the AAA Iowa Cubs roster. The 27-year-old sinker-baller could slide into the rotation (he’s not yet listed as a probable starter for any of the next three games), or could pitch out of the pen with an eye toward trying to work his way onto the Cubs’ big league roster in September.

Cahill, 27, has fallen on hard times in recent years as the looming threat of questionable peripherals seemingly caught up with him. You may remember Cahill as a breakout righty for the A’s who was subsequently traded to the Diamondbacks in late 2011 as part of a larger deal that netted the A’s, among others, pitching prospect Jarrod Parker.

That first season with the Diamondbacks in 2012 was probably Cahill’s last really good season, as he saw his walk rate creep up and his previously outstanding groundball rate fall. He bounced around to the Braves via trade before this season, and then on to the Dodgers this year after the Braves let him go in June. But he recently opted out of his minor league deal with LA, and signed on with the Cubs.

Being that he’s just 27 and was formerly a big-league-caliber arm, you don’t want to completely discount the possibility that he could be a contributor. On the other hand, the Dodgers are definitely not without needs in the big-league-caliber pitching depth department, and they let him walk. Still, the velocity isn’t noticeably down, and perhaps the groundball stuff is still in there.

So, we’ll see how Cahill is used, and whether there’s a chance for him on the big team before the year is done. For now, I’d view this strictly as a pre-emptive depth move. That, plus the Cubs get Cahill into the organization, see what he’s got, and maybe see where that relationship could go heading into next season if Cahill finds himself looking for another minor league deal.