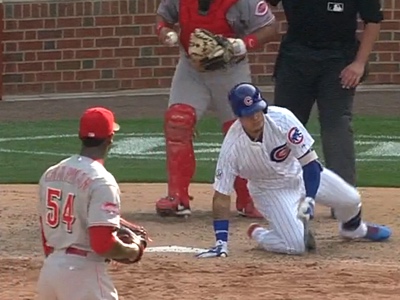 Today’s an off-day, and, regrettably, it follows a disappointing loss to a disappointing Reds team. Looking back at the game, at least there were some fun things to see. Some of the miscellany …

The highlight of the day was undoubtedly Kris Bryant’s clutch, two-run, game-tying homer in the 8th inning:

We’ll just pretend that nothing of consequence happened after that.

Ok, so this was after the Bryant homer, and it wasn’t actually a good thing, but, with a little time and distance, I can shake my head in a half-enjoying kind of way:

How'd his cleats stay on? https://t.co/TqmIxOZbsb

Baez didn’t quite swing himself out of his shoes, and, although he hit the dirt, that actually looked like a more controlled swing than he was employing last year when he went all out. So far in his return to the big leagues, I see a better approach, especially with two strikes (which is good, because he’s been in a two-strike count every single time, I believe).

Aroldis Chapman will make lots of batters look silly, and, in that moment, Baez looked silly in large part because he simply didn’t need to swing that hard. But you gotta be you, to some extent.

Also fun in a silly kind of way, Anthony Rizzo playing soccer mom with orange slices in the dugout:

It was a very hot day. Gotta stay hydrated and fruitified. Rizzo jacked a solo shot in the game for good measure.

Also blasting a solo shot, Tommy La Stella, who has power if you put the ball right there. Seriously, Iglesias missed his spot by about a foot on that one.

La Stella also made a really nice diving play in the 9th.

Chris Coghlan had another really nice catch – say what you will about his overall defense in the outfield (for me, it’s not terrible, it’s just not necessarily plus), but he’s been making impressive catches all year: