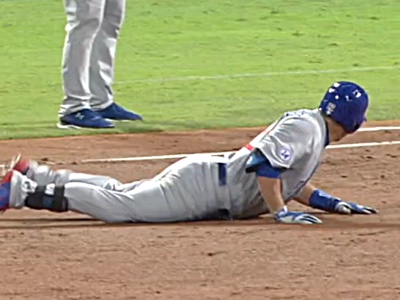 Last night, Kyle Schwarber not only sent one 448 feet to center in his first at bat, he also hammered one the opposite way in his next at – two homers in two pitches, to be precise. Here’s that second homer:

As you could see, because he’s a hustler (the good kind), Schwarber wasn’t taking anything for granted, and ran hard around first base. Oopsie doodle:

Getting that uniform dirty. pic.twitter.com/EgbCMCVDoe

As long as he didn’t hurt himself, it’s all good fun.

Which his teammates definitely had:

Even the batboy couldn’t help himself:

Even the batboy was chuckling at Schwarber's stumble around first. pic.twitter.com/mkz9ySiL2Q

And the GIF of Schwarber rounding first was absolutely perfect for this:

This was also fun:

Schwarber also sports a bizarre and unique .179/.286/.512 line over his last month or so. He has just 15 hits in that span, but 9 of them are homers. His .143 BABIP in that time isn’t all his fault, though the strikeout rate has been elevated (34.7%). You can’t assume he’ll always homer this much when going through a rough stretch, but, hey, if he generally keeps the power and the patience (13.3% BB rate) during the rough patches, he’s going to be a fantastic big league hitter.