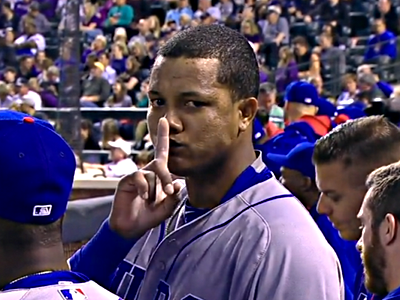 With the winning run on first base in the form of speedy Starling Marte, with just one out, and with Aramis Ramirez at the plate, last night’s game was very much in doubt in the bottom of the 9th.

Ramirez sent a rocket up the middle that was ticketed for center field, and Marte was about to be standing on third base with just one out.

But thanks to some excellent defensive positioning, and an even more excellent play by Starlin Castro, the inning ended instead.

That ball came up on Castro so hard that he was reaching not only laterally but also back toward the outfield to be able to snag it as he laid out.

I also liked how smoothly and calmly Javy Baez made the turn; even though he had Marte bearing down on him, he knew he had plenty of time to get Ramirez at first.

There will be plenty of questions about Starlin Castro’s future with the Cubs after this season, but I’m not sure anyone outside of Yoenis Cespedes has improved his standing in the eyes of observers more than Castro in the last month and a half. Sure, it’s mostly because of the depths to which he had sunk, but it’s also a credit to how flexible he’s been, how dedicated he’s been to re-imagining himself, and how much he’s improved at the plate.