META: On the Demise of Grantland and the Things We Do to Survive Skip to content 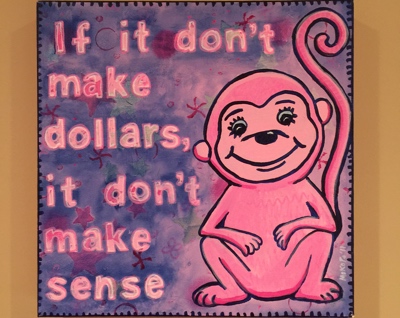 When our daughter was born, my wife’s brother gave us an excellent gift. It was a series of three monkey paintings, with sweet life sayings, of the kind you’d display in a child’s room.

At the time, and throughout stints in not only The Little Girl’s room but also The Little Boy’s, my greatest appreciation for the third painting was as a not-what-you-expected joke that followed the first two. Having it on display in our kids’ rooms, together with the sayings in the first two paintings, was a reflection of our sense of humor much more than our sense of priorities.

I thought of that painting on Friday, and it wasn’t accompanied by the usual knowing chuckle to myself. It bummed me out.

ESPN shuttered Grantland on Friday, marking the end of one of the Internet’s most interesting, diverse, off-beat, and thoughtful publications.

Whether you read Grantland much or not, it was an important piece of the online sports world, offering a clever intersection of sports and pop culture, letting great writers simply be, and focusing more on the “so what” and “now what” of sports journalism than just the “what.” That last bit, with which I feel a strong kinship in what we have already tried to do here at BN, comes from this Chris Cillizza Washington Post piece, which does a much better job than I ever could explaining why Grantland mattered.

Grantland was seen as an indulgence by ESPN, particularly after the latter divorced itself from the man who conceived of and developed the site, Bill Simmons. So, then, when the sites costs could not be justified by its revenue, particularly after budget cuts were ordered by the parent’s parent in Disney, the e-doors were closed.

I was sad on Friday. Lots of folks were. It’s hard to see a bunch of insanely talented writers scattered to the winds – most will be fine on the strength of their ability – and to know that the web got a little bit less bright.

I was also sad because the closing of Grantland was a reaffirmation of something I’ve long known as a publisher, but something I rarely allow myself to dwell upon, let alone discuss publicly: if it don’t make dollars, it don’t make sense.

Creating and operating a site like Grantland costs a lot of money. A lot. Of money. And, on its own accord, it was not doing enough to generate the revenue necessary to justify those costs.

It’s the uncomfortable reality of our world. Sometimes, the silly, click-y stuff is needed to help subsidize the longer, thoughtful stuff. My hope is that it’s all enjoyable and worthwhile to readers – I wouldn’t do it otherwise, because I think a site can successfully walk that line. But I am permitted to spend the time it takes to do a pondering season wrap-up like this because I can also do a quick-hit on Jake Arrieta’s beard. The latter will probably generate more revenue for the site, but the former will generate more goodwill. They are both necessary to run a successful site like this in 2015.

… so is bombarding folks with your social media channels (please like us on Facebook! please follow us on Twitter! this is not actually a joke, please do those things and tell your friends to do the same!). Nowadays, without a robust social media presence, your media site will die.

… so is having as much advertising as your readers can reasonably stomach without rejecting the site entirely. Nowadays, without a ton of advertising (with apologies, the subscription model does not work for sites like this), your media site will die.

… so is telling those same readers to please not block the ads, even if it slows down their browsing experience slightly. Nowadays, if too many people block ads, your media site will die.

Doing good work, honoring and caring for your readers, and providing real value are all critical. But they are not enough.

If that all sounds dramatic, the proof is in the pudding. There was no one who read Grantland with any kind of regularity who didn’t love the work they did. It was good. It had ESPN’s backing. It was the kind of site that should have been able to live a quiet, successful life for a very long time. But it didn’t make enough revenue, and it died. Being good was not enough.

It’s a shame that ESPN didn’t view Grantland as the part of itself that, for the good of the sports-related web, it needed to subsidize financially with the HOT-SPORTS-TAKES it has perfected and monetized on the mothership. When ESPN made Grantland its own thing, though, it was set afloat to generate enough revenue to sustain itself. The ugly truth, apparently, is that it did not. As a consumer of sophisticated online content, you may hate that reality. But I’m just giving you the peak behind the curtain as to why we publishers do some of the things we do: we want to survive.