Zack Greinke Opts Out of His Dodgers Contract, is Officially a Free Agent Skip to content 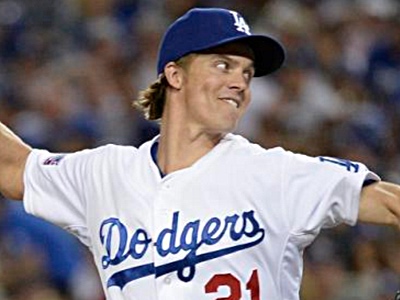 Although it’s long been expected, this is the kind of thing that’s sufficiently big news that we need to make note:

Zack Greinke has officially opted out. He is a free agent. #Dodgers

Greinke, who just turned 32, had $71 million remaining on his deal after this year, but he’s rightly calculating that he can get more on the open market after yet another fantastic season in which he showed no signs of decline. A five or six-year contract in the $140 to $150 million range would not be a surprise to me.

His presence on the market – though long expected – further increases the supply of quality pitching. That’s a good thing for the Cubs.

The Dodgers are probably still the presumptive favorite to retain Greinke at this point – indeed, I’m sure those talks have already begun in earnest – but if a new deal isn’t reached by Friday, the Dodgers will give him a qualifying offer, which he’ll decline, and he’ll be off to negotiate with other possible suitors. Will the Cubs get involved? I tend to think he won’t be among their top targets given the age and price, but I’m sure they’ll check in, just as they will with almost every available starting pitcher.

This should also serve as a reminder of the risks of building opt-outs into long-term contracts: Greinke was awesome for the Dodgers, about which I’m sure they’re pleased, but now he gets to leave the portion of his deal that could have proved valuable for the Dodgers. Had he been ineffective or hurt, however, the Dodgers would have remained on the hook. Opt outs lock in the downside risk for a team while lopping off a good deal of the potential upside. If a player has the negotiating power to demand one, well, then, you might have to do what you have to do. (Not unlike no-trade clauses – something the Cubs’ front office doesn’t like to give out, but had to give one to Jon Lester.)