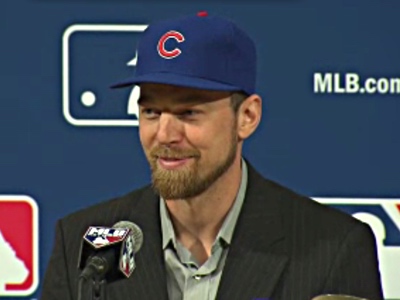 In some ways, Ben Zobrist epitomizes what Starlin Castro wasn’t in the field: steady, consistent, and regularly above average, even if not likely to make extraordinary plays too frequently. And maybe that is another one of the primary reasons the Cubs chose to sign Zobrist and ship Castro to the Yankees at the Winter Meetings.

Zobrist’s versatility on defense isn’t breaking news around these parts, but the way he has gone about playing defense over the years is where his value truly lies.

Digging into Zobrist’s Inside Edge Fielding statistics provided at Fangraphs, Zobrist checks all the boxes of being a steady, reliable defender at each of the positions he plays. And that is despite not having played enough innings or received enough chances to qualify for a spot on the leaderboard.

Zobrist’s career defense at second base (4,825.1 innings) rates favorably. Since 2012, he has made 98.3 percent of the “Routine” plays that have gone his way. Among second basemen with at least 2500 innings during that stretch, he would rank among the likes of Brian Dozier and Jason Kipnis, who also gobble up 98.3 percent of the routine plays, just outside the top ten.

On plays that are deemed “Likely” by Inside Edge, Zobrist (74.5 percent) ranks right there with Kipnis (75.5 percent), putting him at number 20 among players with at least 2500 innings at second since 2012.

It’s the tough plays that Zobrist can’t seem to get his hands on. And that’s not likely to change for the better as he enters his age 35 season, though he’s not much worse relative to the rest of the league.

Zobrist has made plays on 52 percent of “Even” chances, which slides him between guys like Dozier (57.9) and Omar Infante (50.0), and 18th overall among players with at least 2500 innings at second since 2012. He isn’t the type to get to plays labeled “Unlikely” as his 26.3 percent rates between Infate (26.9 percent) and Jose Altuve (25.5 percent), which is 17th. Don’t expect him to get to the “Remote” chances at second either (2.8 percent), again 17th. However, not many get to those anyway, as Brandon Phillips and Jose Altuve lead the way in that category at 7.9 percent.

(In case you’re wondering, although Castro falls into a similar range as Zobrist (though at shortstop for Castro) for plays tougher than “Routine,” Castro falls down to 24th on Routine plays. Given that the volume of “Routine” plays dwarf the size of the other categories combined, you can see why Zobrist coming in just outside the top ten on these types of plays is a significant difference.)

However, it just isn’t about second base play with Zobrist. He has played more than 3,100 innings in the outfield since 2012 and his play there almost resembles what his play on the infield suggests.

As a right fielder (2,317.1 innings), Zobrist gets to 99 percent of the “Routine” plays and 91.7 percent of chances labeled “Likely.” For the sake of comparison Jason Hayward gets to 92.4 percent of those chances, while Jose Bautista gets to 91.5 percent. So, Zobrist is in good company there.

With regard to the “Even” plays, Zobrist has converted on 50 percent of those chances, which ranks between Torii Hunter (52.2 percent) and Jay Bruce (48 percent). He’s not the type to get to the “Unlikely” chances (16.7 percent). Zobrist has been as steady in left field (656 innings) as he has in right, getting to 98.2 percent of “Routine” plays and 91.7 percent of “Likely” chances.

It is apparent that Zobrist isn’t going to make SportsCenter Top-10 highlight reel worthy catches. But he should bring the kind of defensive presence that can be a stabilizing force. And while that isn’t sexy, that kind of dependability in the field can only help put pitchers at ease.