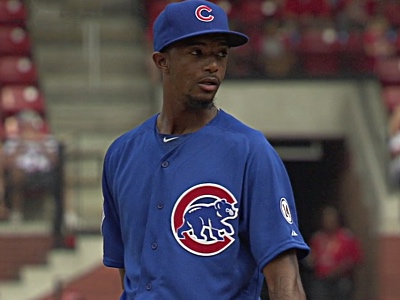 The eighth player on the mid-season Top 40, and the eighth player to be written up in this winter’s Prospects Progress, is pitcher Carl Edwards, Jr. Edwards played at three different levels in 2015, including the Major Leagues, and played pretty well. There are still some questions regarding his future, but I think we know enough now to have a pretty good idea what sort of value he can provide to the Cubs in the next season or two.

One question that probably been answered concerned his role: is he a starter or a reliever long term? Considering that he has pitched more than 100 professional innings in exactly one year of his career (2013) and that he pitched just 60 innings in 2015, for the time being at least he is a reliever. I don’t think there is any scenario in which he would be asked to pick a full season of a major league starter’s workload in 2016, and that almost certainly means he will be working primarily out of the pen. His stuff remains very good, easily good enough for him to be stretched into a productive starter one day (if the stamina and command is there).

Even if his walk rate stays somewhat elevated, he could probably be a fairly valuable reliever thanks to everything else he brings to the mound. Consider for a moment that his FIP numbers for 2015 were 2.97 (AA), 3.50 (AAA), and 3.35 (MLB). Those healthy FIPs are due largely to his good strikeout rates and the fact that he allowed just one home run all season long, and occurred in spite of the walk rate. Those positives should still apply if he can cut back on the walks, though, meaning that there is plenty of room for the FIP to drop.

On top of that, Edwards has emerged a strong ground ball pitcher, one who posted a 58% ground ball rate in the majors to go with his his GO/AO of 2.00. Combine those grounders with the strikeouts and a lack of homers and it easy to see a very bright future for Edwards. And at least in the near term, that future will likely be as a Super Utility Pitcher.

While he worked only an inning at a time in his short Major League appearance, with Iowa and Tennessee Edwards frequently went two innings and faced anywhere from six to nine batters before being removed. His innings allotment for 2016 should easily allow those two inning stints to remain his norm, and I wouldn’t be surprised to see some three inning appearances from time to time (particularly if he can cut back on the walks). He could even be an option for a spot start or two if the need arises (although I don’t think he would be the first choice).

Edwards could be one of the first of a wave of multi-inning relief specialists, the Super Utility Pitcher, as Brett has accurately branded them, to emerge from the Cubs’ farm system.

The Cubs bullpen roster has gotten rather deep this winter, and that means Edwards is no sure bet to make the Major League roster out of spring training. No matter where he starts the year, though, I think he will finish up in Chicago as a potentially valuable contributor in medium length roles out of the bullpen.  If he can get the walk rate under control, he could remain a key contributor in a Super Utility or late-inning role for quite some time.