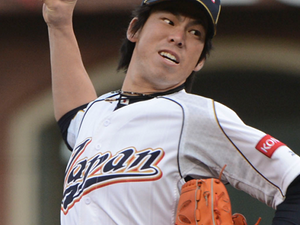 Last week, the Los Angeles Dodgers announced, after some misses, that they’d finally signed a free agent starting pitcher, Scott Kazmir. Although the deal was very interesting for a variety of competitiveness and market-moving reasons, it was most interesting because of its extremely unique structure. It was a “three-year”, $48 million deal, but the payments were deferred over the course of six years, and Kazmir has the right to opt out after the very first year. It’s not quite like any deal for a free agent like Kazmir that we’ve ever seen, and it could wind up a great move for both sides if the Dodgers get a solid year out of Kazmir and then he gets to re-enter a very weak free agent market after 2016.

But the creativity in the Kazmir contract sounds like it’s going to be nothing compared to how the Dodgers inked Japanese pitcher Kenta Maeda.

You’ll recall that the sides recently reportedly came to a deal after Maeda was posted by his team in Japan (which will require a one-time, $20 million fee for his rights). Most expected Maeda’s deal to be in the $50 to $60 million range, putting the total dollar commitment roughly in the same range as what Mike Leake got from the Cardinals.

But Christopher Meola and Joel Sherman instead indicate that the Maeda deal will be for an almost unthinkably small guarantee – $24 or $25 million – over eight years. There will be incentives built into the deal (presumably significant and achievable), but that small guarantee makes this an easily affordable risk for the Dodgers, even if Maeda winds up becoming nothing more than a number five or a bullpen arm. I can’t help but wonder if he’ll have an opt-out specifically for the right to return to Japan after a few years if he’s not starting. I’m just speculating.

The contract suggests strongly that the market for Maeda’s services, when factoring in the $20 million posting fee, was not nearly as robust as many believed it would be. Perhaps, even, very few teams were willing to make the $20 million posting offer, thus severely diminishing Maeda’s negotiating leverage. Some are celebrating this deal as a victory of Dodgers negotiating prowess, but, if I’m a Dodgers fan, it leaves me wondering if Maeda simply isn’t expected to translate very well to the big leagues. I guess we’ll see on that front, as opinions vary.

As for Maeda, you might be wondering: why would he take this kind of deal at all, with a mere $3 million per year guaranteed? Well, setting aside the incentives built into the deal – which, again, may well be extremely significant and easily-achievable when all is said and done – you have to remember that a $24 or $25 million guarantee over the next eight years is still probably a lot more than he was going to earn in Japan. Consider, Maeda’s 2015 salary – a season in which he won the NPB equivalent of the Cy Young, and came after many years of dominance – was reportedly just $2.5 million, and even the top free agents in NPB rarely get more than $4 million.

The more I type this out, the more I’m convinced that the market for Maeda, after the posting fee, must have been very small. And without many teams to which he could market his services, he was left trying to find the best possible deal that, at a minimum, was better than he could do in Japan. This deal is, and maybe it’ll prove a great value for the Dodgers. Or maybe Maeda will struggle to adjust to MLB, and it will be a sunk cost.

Either way, it’s a relatively small cost for the loaded Dodgers, and I can’t help but think it was a good move for them (in their particular situation).

There was a lot of hand-wringing about the Greinke/Chapman/Iwakuma situations, but does anyone really think the Dodgers don’t look plenty scary on paper?