Ryne Sandberg to Rejoin the Cubs in an Official Capacity? (UPDATE) Skip to content 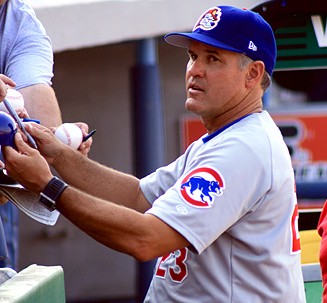 Chicago Cubs Hall of Famer Ryne Sandberg may finally be returning back to Chicago in an official, team capacity. After having spent the previous four years (2011-2015) in the Phillies organization, Sandberg will be in attendance at the 2016 Cubs Convention this weekend.

And there could be more:

Sandberg will appear at Cub convention . His duties are still be worked out as an ambassador. Sandberg lives in Chicago full time .

If you recall, Sandberg was the manager of three Cubs Minor League affiliates (Class A Peoria Chiefs, AA Tennessee Smokies and AAA Iowa Cubs) from 2007-2010. In 2007, his first season as a manager, he took the Chiefs to the Midwest League Championship, and by 2010 – his last in the Cubs system – he won the manager of the year award for the Pacific Coast League. By all accounts – including then-Cubs-manager Lou Piniella, himself – Sandberg was in the mix to take over as the Cubs’ manager after Piniella finished out the 2010 season.

The only problem there was that Piniella retired in the middle of August, so the Cubs were forced to hire an interim manager, Mike Quade, to finish out the season.

It was then announced that Quade would be returning as the actual manager for the 2011 season, and Sandberg felt it was time to move on from the Cubs altogether. In 2011, he moved to the Phillies organization, managing their highest level affiliate the Lehigh Valley Iron Pigs. That season he led the team to their first every postseason appearance and International League Championship – he was once again manager of the year. After one more season in the minors, he was named as interim manager of the Philadelphia Phillies and received a three-year contract (2014-2016) with an option for a fourth year later that season.

Unfortunately, the Phillies were a bit of mess in 2015, and with a record of 26-48 – the worst in MLB – Sandberg resigned his post as manager. Whether or not the Cubs were grooming Sandberg to be manager or not is up for some debate. I would have to assume at the time, that seemed like a great plan: let him work his way up through the system gaining coaching experience before he can become this iconic Hall of Fame manager for a Cubs team we expected to be good.

But after the sale of the team, the brand new front office, “The Plan” and all of the losing that was associated with that, my guess is that no one in the Cubs organization – knowing what was coming – wanted Sandberg to be the face of 4 straight losing teams. In fact, they prevented him from experiencing exactly what he went through in Philadelphia.

Whether it was for the best or not, it’s all in the past. Ryne Sandberg appears to soon be back in the Cubs organization and that’s exciting news. He’s had some truly fantastic years for the Cubs on the field and in the dugout, and hopefully now, he can bring that energy, experience and talent to his new role, whatever it may prove to be.

UPDATE: Some kind of role is definitely coming:

Ryne Sandberg confirms he will work for Cubs