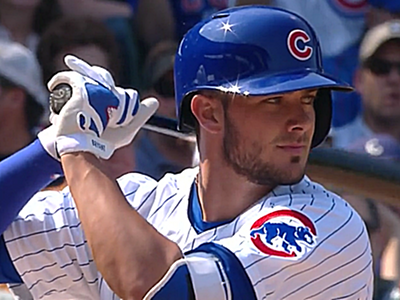 It’s truly difficult to dedicate enough time to the star-caliber players of the current Cubs team. This won’t always be the case, of course, but as of right now, the Cubs arguably have four “franchise” players in Anthony Rizzo, Kris Bryant, Jake Arrieta and Jason Heyward.

But what’s crazy about that list, is that I excluded Kyle Schwarber – who so frequently stole the show in 2015 – Jorge Soler – who might explode any minute – Ben Zobrist – a long time star and World Series Champion – Jon Lester – who just finished the third best season for a Cubs pitcher in 20 years – and Joe Maddon – one of the most visible and likable managers in Chicago Sports. (Oh, and also, Addison Russell.)

My point being, it is both shocking and understandable, that I haven’t written a dedicated post about the Cubs’ 24-year-old Rookie of the Year in quite some time.

To that end, if Bryant made zero changes to his game/swing, he’d still likely be one of the premier players in baseball. But if you know anything about the reigning NL ROY, you know that being content is not in his genes. Which is why it’s not surprising to see Mark Gonzales (Chicago Tribune) reporting the following:

Bryant altered his swing to cut down on his league-leading 199 strikeouts and to square up on pitches that he missed or fouled off. His batting session Tuesday was encouraging as he hit line drives to all fields. “I feel (my swing is) a little flatter, and that’s what I wanted to be,” Bryant said. “It was at too steep of an angle at times. That was my downfall last year, but I think it can only get better from here.”

It’s no secret that Kris Bryant struck out quite a bit in 2016. But he was also one of the few players that somehow also had enough quality contact and on base skills to make up for that. We’ve read many scouting reports echoing that sentiment; namely, even if he never cut down on the Ks, Bryant is the rare player that can still perform at truly elite levels.

Either way, if he can cut down on the Ks, without negatively impacting the rest of his performance, he might actually take another step forward (that could be fun).

But a less-frequently discussed area for potential improvement is the natural uppercut Bryant’s swing produces. You don’t have to be a scout to have noticed that Bryant’s swing is inherently built to launch balls sky high and really far – it’s just, that’s not always desirable, at least not in the extreme.

So even more than his work towards reducing strike outs, I’m encouraged to see Bryant attempting to flatten out his swing.

In 2015, the average MLB fly ball rate was 34.4%; Kris Bryant’s was 45.2%, 6th highest in baseball. Of course, as we saw, an elevated fly ball rate isn’t in and of itself, a reason for concern – if you hit the ball as hard as he does, hitting it in the air is desirable – but there’s always room for improvement.

If Bryant is able to successfully flatten out his swing just a little bit, you might reasonably expect him to hit for greater contact (lowering the Ks) and a higher average. Given his natural power, he is always going to hit enough home runs to satisfy the fans, but reducing the fly balls and using the entire field might make him a much more well-rounded and dangerous hitter.

No matter what, Kris Bryant looks ready for 2016. You can read more on Bryant and his offseason in Gonzales’s article at the Tribune.

Also, more from the man, himself: