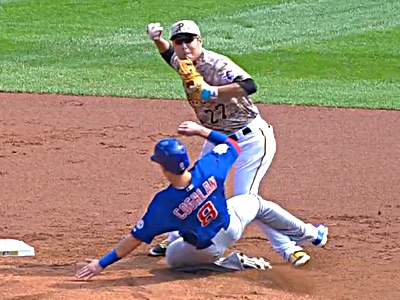 With the insanity of yesterday’s coordinated roster moves, you may have missed some relatively big news from MLB.

The league has redefined what constitutes a legal slide into second base and added two additional pace-of-game initiatives. This Paul Hagen MLB.com article does a good job explaining the new rules, and also providing some player context.

First, let’s start with the new slide rule. Before yesterday, base runners were mostly allowed to slide into second with impunity. As long as they could reach the bag with their hand or foot, the slide was legal. Now, some things are going to change. Runners can still make contact with the fielder covering second, however, there are a few stipulations (in my own words):

There are some more specifics – like the prohibition of a roll block – but that above, is the gist of the changes. The new rule essentially boils down to its actual first line: The runner must make a “bona fide slide.” Slide earlier, slide lower, go for the bag and stay on the bag. If that results in contact with the fielder, then you are fine.

Potential violations will be subject to instant-replay review, which I could see causing a lot of grief (things look very different/more intentional in slow motion than they do in real time), if it weren’t for the other newly-reviewable call: the neighborhood play. Before yesterday, the neighborhood play was not reviewable, but now, middle infielders will be required to actually touch the bag while in possession of the ball in the act of turning a double play (what a novel idea). If they don’t they might not get the out at second base or risk an opposing challenge. [Brett: Hey, this is exactly what I proposed back when the Coghlan/Kang thing happened – force runners to slide at the bag, and then get rid of the neighborhood play, since the fielders won’t need the artificial protection anymore. Good rules changes. Ok, back to Michael, where he will also say these are good rules changes.]

All in all, I think these rules changes are excellent. [See?] The late slides into second base were getting more and more gratuitous, causing the middle infielders to take greater and greater advantage of the neighborhood play. Now that it’s reviewable, middle infielders can’t stray too far off the bag so runners will have less of a reason to initiate contact. Or, let’s say that in reverse. Now that runners are less able to initiate contact due to the new rules, middle infielders will not need to take advantage of the neighborhood play. You see? These rules make sense.

Of course, it will take time for everyone to get used to them, including (or perhaps especially) the umpires. For more reactions and quotes from players and managers around the game, check out Hagen’s article.

The pace-of-play changes are much less game-changing, so to speak, and will likely remain relatively unnoticed in 2016.

The first change is more of a continuation – or, rather, expansion – of a rule already put in place by the first wave of pace-of-play initiatives in 2015. Namely, the time between innings will shrink to 2 minutes and 5 seconds for local broadcasts and 2 minutes and 25 seconds for national broadcasts. These figures are each 20 seconds fewer than the rules for 2015, and were set to match the length of each commercial break. When the commercials end, baseball will promptly begin. Easy enough.

The second change is slightly more visible and is in reference to the amount of time a coach or manager spends on the mound. Before yesterday, there was no actual time limit for visits to the pitcher’s mound. Of course, most umpires wouldn’t allow it to go on for days, but there was no official rule. Now, mound visits will be limited to 30 seconds and will be measured by the same in-stadium clocks that measure the in-between innings countdown. The countdown will begin as soon as the manager leaves the dugout.

I don’t find either of these two changes to be particularly invasive. Now that everyone, including the World Umpires Association, has signed off on the new rules, they are ready to be implemented in 2016. If you recall, the pace-of-play rules from last year shaved game time by a bit over six minutes per game. While that might not seem like a lot, the total time is just one part of the overall issue. Long games aren’t as big of problem if the majority of the time is spent actually playing baseball.

For more reactions on the pace-of-play and slide rule, check out Hagen’s piece at MLB.com. Although these rules changes aren’t very invasive, they are relatively significant.