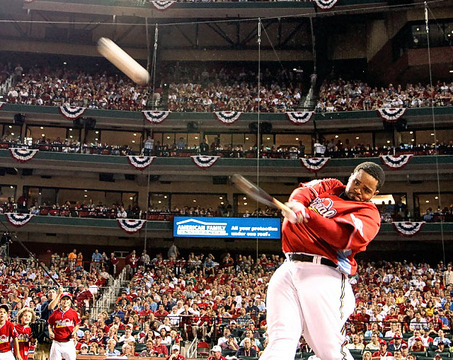 Last we saw Pedro Alvarez, he was struggling against Jake Arrieta in the Wild Card game. Then again, who on the Pirates wasn’t?

It turns out Pittsburgh’s Wild Card game loss was the last we would see of Alvarez in a Pirates uniform, despite hitting 131 home runs and posting an OPS+ of 111 in six seasons with the team. He was not tendered a contract in the offseason and still resides as a free agent as spring training begins.

It appears as if Alvarez might simply be in the wrong place at the wrong time as far as his skill set is concerned.

Over at Forbes, Ben Berkin recently wondered if the home run has become passé in modern baseball. Berkin notes that Jason Heyward, Alex Gordon and Ben Zobrist – who each hit exactly 13 home runs in 2015 – signed three of the biggest offseason deals, while Alvarez, and his 27 home runs, is still available in free agency.

Berkin talked to Scott Pucino, the director of baseball at Octagon (which happens to be the agency that represents Zobrist and others) who noted that complete players are coveted commodities now and players who aren’t well-rounded can find getting work hard because the lack of a league-wide DH. Pucino adds, “Home runs have a lot of value—obviously—but they are valued differently than they were 5-10 years ago.”

The Cubs, a team with several young slugging position players, spent $184 million on Heyward and $56 million on Pucino’s client Zobrist to round things out.

That used to be the kind of money teams spent on traditional power-hitting sluggers, even if it meant sacrificing defense.

Take for example when Carlos Lee signed his six-year, $100 million deal with the Astros in 2006. Lee’s career 113 OPS+ wasn’t that far from Alvarez’s 111 OPS+ and Alvarez is hitting free agency two years younger than Lee did. Further, one could argue that Alvarez is less of a defensive liability at first base than Lee was as a left fielder.

Adam Dunn’s lack of defense didn’t stop him from netting two major free agent deals, though he was in another power class above Alvarez. Dunn had an OPS+ of 130 when he signed a two-year, $20 million deal with the Nationals in 2009. Then parlayed a 141 OPS+ in those seasons into a four-year, $56 million contract with the White Sox.

Perhaps Alvarez and future sluggers can find inspiration in Nelson Cruz, who had a 114 OPS+ through his age 32 season.

Cruz hit the market after hitting 157 homers in 804 games, but had to settle for a one-year deal worth $8 million. That one-year flier with the Orioles helped put Cruz back on the map as he hit 40 homers while cutting his strikeout rate and improving his walk rate, and turned it into a four-year, $57 million contract with the Mariners.

The case of declining value of one-tool sluggers might be less about valuing home runs, but more about drawing a line at where a player’s power production has to be when sacrificing that much defense.

With Ian Desmond signing today for just $8 million (averaged 22 homers per season for the last four seasons, but his defensive metrics declined markedly over that period), you wonder if he was impacted by the shift in thinking, too.