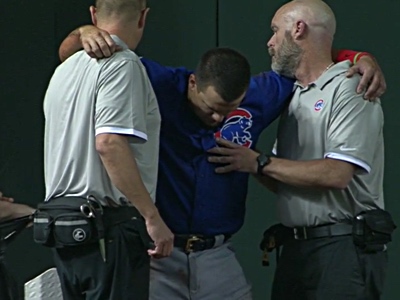 There isn’t much information on this right now, other than what we saw. The short version for now: Kyle Schwarber collided in the outfield with Dexter Fowler as they pursued a ball in the gap, which ultimately became an inside-the-park homer for Jean Segura.

Schwarber went down hard, stayed down, and was in a lot of pain:

As you can see, it’s not one of those situation where you can tell immediately what the injury is, but it is one of those plays that just looks ugly. And the pain was visible.

Trainers came out to check Schwarber out, manipulating his left knee and his ankle. They helped Schwarber to his feet, but it was clear he couldn’t walk, even with support. So the cart came out.

And that’s all we know right now. It looked pretty bad, but we should resist the urge to speculate for now.

Tommy La Stella came into the game to replace Schwarber by way of Kris Bryant heading out to left. Although Rubby De La Rosa has pronounced lefty-righty splits, the fact that La Stella was the choice and not Jorge Soler is probably not a good sign for how Soler is perceived as an “almost starter” right now (which is to say … he must not be viewed that way).

As for Schwarber and the implications of the injury, we just have to wait. I’ll update you when there’s more available, and we’ll talk about what this means for the roster and all that stuff later.

UPDATE: There was no plausibly realistic update that was better than this, as just announced by Len Kasper, from the Cubs, on the broadcast: sprained left ankle, initial X-rays negative. MRI tomorrow.

That said, I want to caution you against getting too excited just yet. For one thing, even if it is an ankle sprain, that can be a long-term injury. Further, sometimes, the initial examination and X-rays don’t reveal everything that an MRI ultimately does. There could still be a serious injury here, and I don’t want you leaving this update feeling like I just told you everything was hunky dory.

Still, to hear – at least initially – that it’s not a broken leg or a torn up knee is a relief. Fingers crossed for more good news this weekend. In the interim, don’t expect to see Schwarber playing for a while in any case.

UPDATE 2: A little more info on the MRI, which will include the knee:

Schwarber MRI will include look at the knee, which for now appears to be only bruised. Either way, DL timetable uncertain.

So, then. It’s nice to know that, initially, the Cubs aren’t thinking the knee has a serious injury, but I suppose it makes sense to take a look if Schwarber’s going to be in the tube anyway. Hopefully it shows nothing in the knee, and nothing too serious in the ankle. But if you were charting the nervousness roller coaster, it was WAY up initially, down a good bit, and now it ticked back up a little.