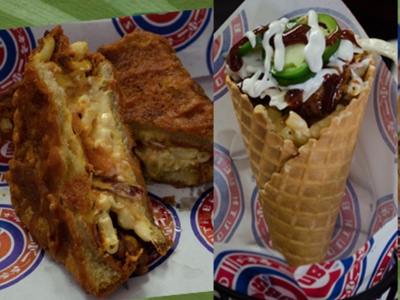 I love minor league baseball. I think that you simply can’t beat it for affordable family entertainment, with emphasis on the affordable. And while all aspects of the experience can be pretty awesome, one that stands out is the food. Over the past few years, minor league ballpark food has been moving into an inventive category unlike anything else.

And this season, the South Bend Cubs are stepping up their culinary game, and the new options sound delicious (if somewhat unhealthy). The first dish that catches the eye is the Porknado, described as:

“A waffle cone layered with hickory smoked pulled pork and home made mac and cheese, freshly made coleslaw, and topped with barbeque sauce.”

I’m really curious about the barbeque sauce they’re using for this. A sauce that can play well on pork AND macaroni and cheese AND a waffle cone is a really versatile sauce. I’m also curious how people will eat it. And by people, I mean me, just as soon as I can get to South Bend.

The dish that really sounds good, though, is the Deep Fried Mac and Cheese sandwich. Just imagine:

“Macaroni mixed with house made beer cheese, topped with crispy bacon, another layer of american cheese, Tabasco marinated tomatoes on Texas Toast, and then deep fried.”

House made cheese and bacon and more cheese and deep fried. Yep. I’ll be trying this one day.

And then we have the Studebaker Special. Bacon topped donuts are so normal now that the Cubs are upping the ante with candied jalapeños and jalapeño jelly.  It sounds messy, but in tasty sort of way.

Triple A: Iowa Cubs
Round Rock 10, Iowa 4
One ugly inning is all that stood between the Cubs and their first win.

Double A: Tennessee Smokies
Mobile 4, Tennessee 1
Not a lot of offense in the early going. The starting pitchers had a good day.

High A: Myrtle Beach Pelicans
Myrtle Beach 7, Frederick 5
Torres had a bad day, but Dunston and Balaguert were there to pick him up.

Low A: South Bend Cubs
This game was postponed due to snow.