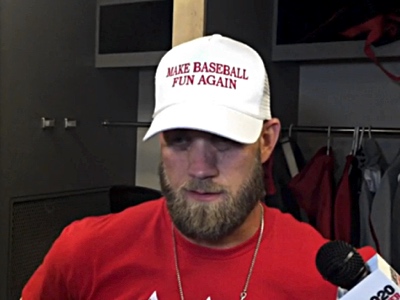 The Chicago Cubs clearly had a plan for dealing with Bryce Harper in this weekend’s series sweep over the Nationals, and, as disappointing as it may have been to lovers of baseball, that plan involved, well, not dealing with Harper at all.

It came to a head yesterday, when Harper tied a big league record with six walks (three intentional), and he was also hit by a pitch (in a plate appearance in which he probably would have walked, because why not?). So, Harper came to the plate seven times and didn’t record a single at bat.

Twice, he was walked intentionally with two outs in extra innings and runners on first and second base, and twice the Cubs were able to retire the man behind him, Ryan Zimmerman, who himself set an ignominious record by leaving 14 runners on base during the game. Whatever your opinion on the theory of “protection,” it’s fair to wonder whether the Cubs would have employed the strategy so aggressively if Daniel Murphy (184 wRC+) were hitting behind Harper instead of Zimmerman (68).

To Harper’s credit, he said the strategy worked, and he’s not going to swing just to swing – if he gets on base every time he comes up, he’s doing his job. The rest of the Nationals seemed more frustrated with the approach, with Dusty Baker likening it to “hack-a-Shaq” (Nationals.com) and saying that the fans didn’t pay to see Harper walk (Washington Post). Nationals starter Tanner Roark was the most direct, calling the move “scared baseball,” and telling the Post, “Most of the time you have faith in your pitchers to challenge a guy, but apparently not. I don’t know. I’d rather pitch to somebody who is the best, the reigning NL MVP, and feel good about myself.”

The Cubs, it seems, should not feel good about themselves because they were too “scared” to pitch to Harper. And all it cost them was a loss.

In a mild defense of Roark, I’ll offer that he made those comments after a deeply-frustrating loss, to cap off a four-game series sweep, and probably a bit in the heat of the moment. I’m not saying he doesn’t believe what he said – I can’t comment on that – but I’ll give a guy a whole lot of leeway in a moment like that. Roark pitched well, and had a chance to beat the reigning Cy Young. His star teammate didn’t even get a chance to make a real difference in the game. I can understand the disappointment.

And in a mild defense of Baker, I’ll offer that repeated intentional (or unintentional intentional – aka, pitching around a guy) walking of a star player does not necessarily make for what fans, at least team-neutral fans, want to see in a given game. If the sport is supposed to be wringing out as much excitement as it can, the last thing you want to see is the very best players – the most magnetic stars – completely neutered by a perfectly legal strategy.

But, then, that’s kind of how we feel about extreme shifting, right? And to that strategy, I think most are in agreement that the other side simply has to adjust, and the pendulum of the sport tends to swing back and forth over a period of years.

I don’t have a problem with what the Cubs did in this series against Harper, and I consider myself someone who loves to see Harper doing his thing (maybe not against the Cubs, but you get my point). In a lineup like that, and in the situations it came up, you simply can’t let Harper beat you.

Hopefully a lineup shuffling for the Nationals and some more timely hitting will render the strategy much less effective, as it’s generally not a good idea to intentionally walk a guy repeatedly and push a runner over to third base. It’s up to the Nationals, however, to make sure the generality becomes something more specific to their own lineup.

To that end, can you imagine a team trying the walk-a-Harp strategy with the Cubs? I mean, who would you even walk? Kris Bryant to get to Anthony Rizzo? Rizzo to get to Ben Zobrist? Zobrist (who has been hitting like Harper for a couple weeks now) to one of the many interchangeable and flexible pieces who are raking after him? The Cubs are fortunate to have not only some star-level producers, but also a variety of them, and a variety of effective bats that make tons of intentional walks not only a less attractive option in the first place, but also an option that is more likely to get you burned than against the average team.

In any case, I found the strategy interesting, as a strong sabermetric subscriber who rarely believes an intentional walk is a good idea. (There are times when it makes sense, though.)

Now we’ll see if other teams pursue it, too, as we saw in the days of Baker’s former superstar lefty slugger, Barry Bonds.

(Another parenthetical by the way about the Nationals: anyone else remember when Zimmerman was a hot-shot third base stud in his early 20s, who reached the big leagues straight out of college, and posted back-to-back 6+ WAR seasons when he was 24 and 25? I do. It can evaporate quickly in the face of an injury here and a league adjustment there.)