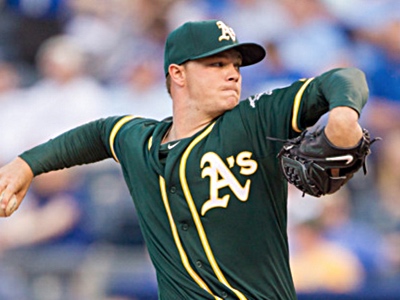 Not entirely unlikely with Josh Reddick, who recently broke his thumb and will be out for four to six weeks, there have been some vague, rumor-like things connecting pitcher Sonny Gray to the Chicago Cubs over the past, say, 12 months. To be sure, most of that has been informed speculation, given the Cubs’ perceived desire to add a cost-controlled, younger starting pitcher, and the A’s perceived need to continuously churn out their arbitration-level players in trade to keep stocking the fridge.

Gray and the Cubs (among other teams) was recently discussed, though, so it’s worth noting – both from a Cubs perspective, and from a general baseball trade interest perspective – that Gray has been placed on the disabled list with a strained right trapezius. If you don’t know, this is where the trapezius is located, and it’s easy to see how a pitcher’s ability to pitch could be dramatically impacted by an injury there, even if it’s not not technically an “arm” injury.

For Gray, I’m sure many are hoping that this actually explains his brutally bad start to the 2016 season, which has seen his performance suffer in just about every possible way. Prior to 2016, Gray was coming off two full seasons in which he accumulated 6.9 WAR (and a dominant partial season the year before that), and demonstrated the ability to go deep into games.

This season, though, has been a train wreck. The 26-year-old righty has a 6.19 ERA, a 5.09 FIP, and a 4.43 xFIP over his first nine starts (in which he’s lasted a total of 48 innings). His strikeout rate has dropped to a scary level (18.5%), his walk rate has exploded (10.8%), and all his other peripherals are far worse than they ever have been. Some of that could be an indicator of small sample bad luck, but it could also be that he’s simply been incredibly hittable. Given that his Soft Contact rate is way down and his Hard Contact rate is way up, and given a slight drop in his velocity, I’m guessing a lot of his bad numbers are because he’s been giving up lots more consistent hard contact.

None of that’s good, of course, and, for a guy under team control for a while, it doesn’t make for the setup to a midseason trade. If Gray is hurt and/or underperforming, the A’s aren’t going to drop his price; they simply won’t shop him at all. Gray is currently slated to be first-time arbitration-eligible next season, so the A’s can afford to wait out whatever this hiccup is – if it is a short-term hiccup instead of a career-arc-changing issue.

You wonder if this is one of those DL stints that is partially about some body part that isn’t feeling too great, but also partially about giving a guy a chance to re-set and take a look at what’s been going on mechanically.

I guess we’ll just see how long Gray is out, and we’ll see how he pitches when he comes back. Even if the answers are “not long” and “really well,” it’s hard to see a buyer coming to a price point that would make sense for the A’s to deal Gray at midseason, instead of simply waiting until the winter to see what’s what. That might be the preference for a team like the Cubs, anyway, since their interest in adding a pitcher like Gray is as much about 2017 and beyond as it would be about 2016.

(Because, by the way: when you look down the road for the Cubs, it’s not at all hard to see that they’re really going to need to figure out a way to get a top-line young starter for 2018 and beyond. And that’s not an issue that you can necessarily put off figuring out until the offseason before 2018.)