Albert Almora is a Visual Treat in the Outfield, Showed It Again (VIDEOS) Skip to content 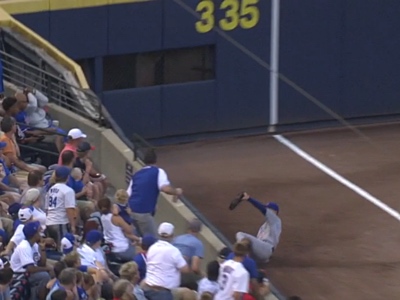 Hit it anywhere near Chicago Cubs outfielder Albert Almora, Jr. and you’re not going to like the results.

We’ve been saying it about the Cubs prospect for years, and we saw it time and again in Spring Training, and then we saw it in his very first start with the Cubs. Almora’s glove is not just big league ready. It’s already big league elite.

In last night’s loss to the Braves, he showed off the glove again, all casual-like with this leaning catch to save a run or two, and all impressive-like with this running, sliding catch:

That’s a direct route to a ball slicing hard away from him, and a perfectly-timed slide into the wall to avoid an impact (while still tracking and catching the ball).

Moreover, he had to cover 87 feet to catch that ball, reaching 20mph in his run (per Statcast).

Almora makes it look so easy on a play like that, but I’m quite certain most outfielders don’t get close to that ball. Also, the fact that he’s able to be this good immediately in left field – no adjustment time whatsoever from center field – is all the more impressive, and all the more indication that he’s simply an elite defensive outfielder (that’s what the best of them can do out there, no matter where they’re playing).