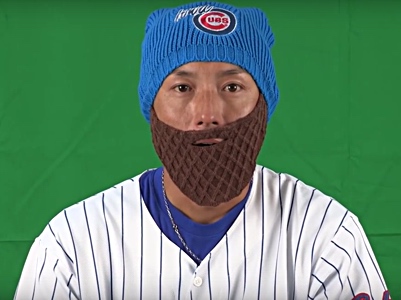 One of the problems with having a super-competitive team at the big league level is that the guys right on the cusp of the big leagues rarely have a chance to come up and shine.

And without casting aspersions on his baseball ability – the dude is really versatile, plays good defense, runs the bases well, and is a nice 25th man on the right roster – that has meant we’ve been deprived of Munenori Kawasaki shining in the ways he did with the Blue Jays, and back in Spring Training with the Cubs. We got one really great interview from Iowa, but that’s been about it.

That is to say: Munenori Kawasaki is a whole lot of fun, and I enjoy watching him have fun.

So, then, it is with great pleasure that I present Kawasaki’s first ever homer in Minor League Baseball, which he hit last night:

Although Kawasaki had one dinger back in 2013 with the big league Blue Jays, he’d never done it in nearly 800 MiLB plate appearances before that.

Look how far the right fielder has to run back on that ball, and you’ll immediately know how unexpected that blast was.

Kawasaki is on the 40-man roster, so there’s a chance he’ll come back up to join the big league club in September, serving as versatile depth off the bench.