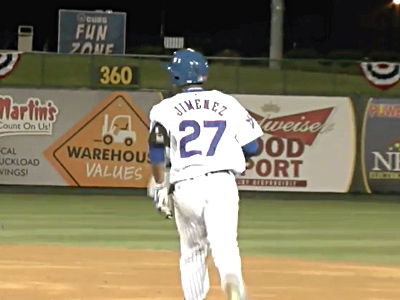 After (possibly) the clearest example of a breakout season in recent memory, Eloy Jimenez’s stock has blossomed beautifully over the last calendar year.

Already, for just a few (of many) examples, he’s …

But such is the case when expectations and projections meet actual performance. In other words, when breakouts happen to physically-gifted, highly-touted, and loftily-projected prospects, the baseball world tends to take notice, and such is the case with Eloy Jimenez.

With that, then, you won’t be surprised to learn that he’s been ranked as the second best prospect in the Midwest League by Baseball America, behind only the second overall pick in the 2016 draft.

Indeed, while this is not another top 100 overall prospect ranking, I’d caution against glossing over it too quickly. The Midwest League happens to be one of only two (bigger) leagues at the full-season A-Ball level; by contrast, High-A and Double-A have three (smaller) leagues apiece. So, a top two ranking in the larger Midwest League is slightly more impressive than a general league ranking elsewhere (and apparently, Jimenez was ranked on top in the first iteration, but was moved down to #2 because of certainty).

In addition, the only player ahead of him, Nick Senzel, is not only two years older and the second overall pick in the most recent draft, he also received the highest signing bonus ($6.2 million) of any player drafted in 2016 (like Kris Bryant did, when he went second overall, but scored the highest bonus ($6.7 million) in the draft). Put simply: BA must really like Jimenez.

But then, how could you not? As one of the youngest players in the league, Jimenez slashed .329/.369/.532 in over 450 plate appearances, and led the league in most offensive categories. His one downside/risk was a lack of walks, but when you’re 19 and crushing the ball like he was (and still getting on base at a .369 clip) it’s hard to change much until you’re challenged.

Baseball America’s accompanying notes on Jimenez are behind a paywall, so I won’t share too much of their report, but I can let you know that they noticed an improvement in his outfield defense and have been impressed by his personality and temperament off the field and his willingness to learn. Sounds like a win all-around.

Vince Lara-Cinisomo held a chat regarding the Midwest League Top 20 Prospect list/rankings which you can see here (there are a number of Cubs bits spread throughout). Most notably: although Jimenez was the only Cubs prospect to make the cut, Donnie Dewees was apparently quite close. Lara-Cinisomo is impressed with Dewees, and suggests he’s a 70 runner with the ability to develop more power as he matures.

Even though I’ve said it a bunch already (and I’ll say it a bunch more, yet), it doesn’t make it any less true: the Cubs have shown well in the minors, and still have plenty of impactful tricks up their sleeve. Eloy Jimenez is just one of the best.