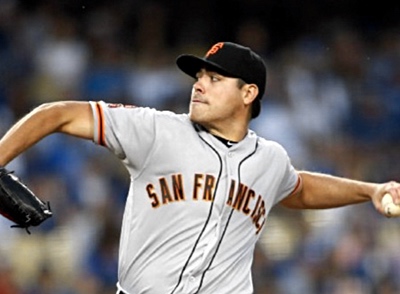 The Cubs couldn’t quite get things done on the road last night, blowing an eighth inning lead (with one of the best bullpens in baseball), before later losing in extras.

But you know all about that by now, so let’s move on.

Because after all, there’s another game in San Francisco tonight, and the Cubs could once again send the Giants home with a victory.

We’re a ways off from learning who will take the field and square up at the plate for either team, but we are perfectly aware of this evening’s starters.

In a few short hours, John Lackey will take the mound for the Cubs against the Giants’ big deadline acquisition, Matt Moore. The Cubs were tied to Moore throughout the offseason and at the trade deadline before he went from the Rays to the Giants, so we are at least a little familiar with his work, but it’s time to take a deeper dive on Moore, with special attention to his time with the Giants so far.

But first let’s do the 10 second background. Moore, 27, is a left-handed starting pitcher drafted by the Rays in the eighth round of the 2007 MLB draft. After steadily climbing through the Rays system as a high-profile pitching prospect, Moore eventually made his MLB debut near the end of September, 2011 (before taking the mound in Game 1 of the ALDS a couple weeks later), and was an All-Star by 2013*. Of course, TINSTAAPP, and in 2014, Moore tore a ligament in his left elbow, which required Tommy John surgery.

Moore reached just 73 innings total from 2014-2015, before coming back healthy and strong with 198.1 innings for the Rays and Giants, here in 2016. Interestingly, he posted identical 4.08 ERAs in his 130 IP for the Rays and 68.1 IP for the Giants, but that’s about where the similarities stop. So let’s check out each half and see what changed upon moving to the Giants.

So, as you can see, Moore’s peripherals improved dramatically in the second half of the season, even though the results didn’t quite follow. His walk rate did climb, but his strikeout rate climbed even more and his overall K/BB rate improved from 12.6% to 12.8%. Moreover, his ground ball rate increased to a more respectable figure, his opposing batting average fell (even though his BABIP rose to more normal levels) and he began giving up fewer home runs.

In short, he got better. The numbers just haven’t quite followed … yet.

If your first instinct was to check out his batted ball data, you’re not alone:

The problem is, it just doesn’t really explain much. On the one hand, Moore induced a lot more weak contact in the first half (Rays) of the season than he did in the second half (Giants), but on the other hand, he allowed a lot less hard contact with the Giants. I’m not sure there’s been a ton of digging into the relative value of balancing hard v. soft contact, but I’m inclined to believe that allowing less hard contact is more impactful (to some X degree) than inducing more weak contact. For example, Jon Lester has found a great deal of success this season (using this formula) – he’s sixth best in hard contact, but 33rd best in soft contact.

Although that explains some of the success, it’s still a bit on the effects side, instead of the cause. We’ll have to take this one level deeper, to get to the bottom of it. For that, we’ll use his pitch mix … which has changed dramatically since arriving in San Francisco:

At last, now were getting somewhere. Upon reaching San Francisco, the Giants made a very notable (and likely positively impactful) change to Moore’s pitch-mix. They decreased the number of fastballs (by a lot), curveballs, and change-ups, while introduced a new pitch, his cutter, significantly into the mix. I can’t speak towards the precise impact of adding that pitch, because it’s likely a bit more nuanced than just the singular added value (in other words, although the cutter rates as slightly negative by Pitch Value, flashing a new pitch, might inherently improve the look of his other pitches, as well), but it certainly looks like we’ve found the big difference maker.

So if you followed Moore in the first half of the season/throughout his time with the Rays, you might be seeing a different guy tonight. Tonight’s Matt Moore uses four pitches (including a cutter), allows less hard contact, gets more ground balls, allows fewer home runs, strikes more batters out, but walks more as well.

He’s still stronger against left-handers, though, so expect some more righties in there tonight. But remember, despite his former pedigree as a top prospect, a young All-Star, and a guy with improved peripherals in the second half, Moore is beatable. Very beatable, in fact, especially with patience, and the Cubs are going to give him a tough time.

*He also became the first left-handed pitcher under the age of 23 to begin the season with eight wins. The previous lefty? A 22-year-old Babe Ruth.