The Moment of a Lifetime: The Chicago Cubs Won the World Series Skip to content 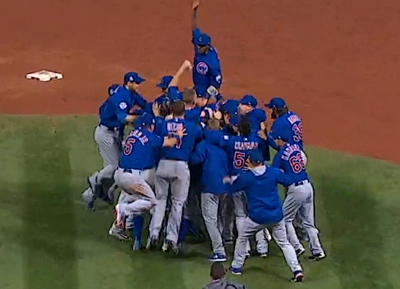 Like me, you woke up today (eventually) in a world where the Chicago Cubs are the World Series champions. Digesting that – fully embracing that – is going to take a little time. As best I can figure, we’re in for a very nice stretch of days where we can just roll around in the feeling, thinking about this wonderful season and last night’s epic exclamation point, and then smiling to ourselves. Maybe we can even hold onto this feeling forever.

I will have a longer, more thoughtful write-up on the championship soon. For now, for this morning, I wanted to highlight the celebration’s that came out of last night’s win, arguably the biggest win in the history of sports. How do you even celebrate something like that?

For me, for what it’s worth: I lost my mind with some friends at the watch party at The Metro. I couldn’t help but take some video, and I think this pretty much sums up the reaction, including the complete loss of control of the camera:

I hugged everyone more times than I can count, I sobbed for two stretches of time, I lost myself in the sea of joyous humanity around Wrigley Field, and I eventually made it to the marquee to see the words we’ve waited so long to see:

The moment it happened: pic.twitter.com/v5Cljhk1vZ

Not a car in Wrigleyville that isn't laying on its horn in celebration. More people than I've ever seen. This place is doing it right.

@BleacherNation not a final out vid, but this happened at every L stop last night on our ride downtown. pic.twitter.com/41pzpa4JoW

@BleacherNation and I took these pictures without knowing about each other. pic.twitter.com/NW0TIgzPYA

@BleacherNation from the field pic.twitter.com/xt82ZEvNaN

And I just cried again:

Also, if you’re looking to pick up OFFICIAL postseason gear, including the brand new World Champion shirts and hats, we now have a relationship with Fanatics. So, get the official gear here, and you support BN in the process: