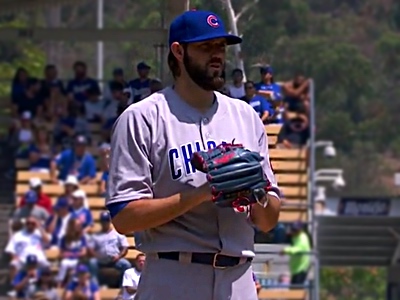 UPDATE: Although the discussion below remains interesting background, the decision has been made, and the option on Jason Hammel has been declined. The rest of the original post remains below.

With the wonderful 2016 season in the books, the Cubs will now turn their attention to the offseason, and the coming 2017 Chicago Cubs roster.

One of the biggest in-house decisions they’ll have to make (by tomorrow at 4pm CT) is whether or not to pick up their 2017 option on right-handed starter Jason Hammel.

If the Cubs decide to pick up Hammel’s option for 2017, they’ll owe him $12 million in salary over the course of the year. If not, he’ll receive a $2 million buyout.

So at the end of the day, it’s really a $10 million dollar decision – but which way are the Cubs leaning? It’s not too easy to be sure.

Before the 2015 season, the Chicago Cubs signed Jason Hammel to a two-year/$20 million deal (plus that option for 2017). It was a great deal at the time and, honestly, still seems like the right move. But whether or not they pick up the extra $10 million to have Hammel return in 2017 depends on how well they think he’ll pitch.

Although the drop off wasn’t as significant in 2016, Hammel has had difficulty keeping a consistent level of production throughout an entire season. Moreover, he has never pitched more than 177.2 inning in any single season. At 34 years old, then, it’s fair to wonder how much he has left in the tank for 2017.

Then again, the Cubs will need pitchers.

Although the Cubs’ rotation was one of (if not) the best in baseball this season, there are questions about what it might look like in 2017. Jon Lester and Kyle Hendricks are probably safe bets for solid performance, but Lester is a year older (he’ll be 33) and Hendricks will have a difficult time repeating his Cy Young-worthy 2016 season. Jake Arrieta and John Lackey are both under control for another year, but the former took a step back this year (albeit after a historic 2015 season), and the latter is 38 years old.

But even if we’re sure all four of those starters will make it through another healthy AND productive season (which is statistically unlikely), the Cubs organization doesn’t have much brewing behind them. Mike Montgomery might be a guy they stretch out to see what he offers there, but he’s carved out a nice place in the bullpen as a multi-inning and high-leverage reliever, too. Travis Wood and Trevor Cahill are free agents. The Cubs don’t seem to be interested in stretching out Justin Grimm (he broke into the league as a part-time starter) or Carl Edwards Jr. (who looks destined for the back of the bullpen). There is some AAA-level depth/upside like Rob Zastryzny, but it is of the unproven type.

Jason Hammel might genuinely be their best in-house option for starting depth.

And then, of course, there’s the absolutely barren starting pitcher free agent class. After Stephen Strasburg extended with the Nationals earlier this season, the next best option for starters is … who? An uneven Andrew Cashner? A 37-year-old Rich Hill? There are just not many good options for just money this year. They can, of course, try to pry away a starter in trade, but if you thought the price of young, cost-controlled starting pitchers was insane last year (it was), can you imagine what it’ll be with no free agent alternatives?

So, my gut tells me that the Cubs pick up the option on Jason Hammel (as a precaution) and then see what happens in the offseason. Then, depending on the corresponding moves, he’ll probably be retained as rotation competition heading into the Spring. You can do a lot worse with your 5th/6th starter.