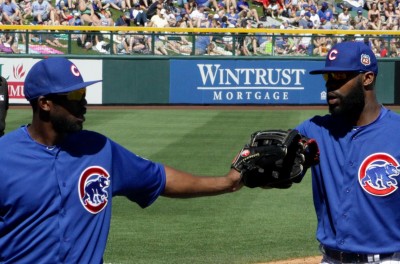 Jason Heyward secured the largest free agent contract in Cubs history last offseason, in part because of his stellar defense in right field. On Tuesday, his defensive prowess was recognized with his third consecutive Gold Glove and fourth overall in his big league career.

It is evident that Heyward’s defensive contributions were instrumental in the Cubs’ total defensive turnaround in 2016. It begins in right field where the Cubs ranked first in the National League in Defensive Runs Saved and Ultimate Zone Rating in 2016 at the position. Last year, they ranked 14th and 12th in those categories, respectively. Naturally, Heyward led the NL in both DRS (14) and UZR (16.4) as well as Defensive Runs Above Average (11.1) in right field.

The 2015 Cubs used 10 different players to cover 1,461.1 defensive innings in right field where they ranked in the bottom third among NL teams in the three categories in which Heyward led the league a year later. Jorge Soler’s 825.2 innings in right led the 2015 group, making him one of 10 NL outfielders to play 800 innings or more at that position. Unfortunately, Soler ranked eighth in Defensive Runs Above Average and ninth in both DRS and UZR.

Since the start of the 2012 season, no right fielder has made more out of zone plays than Heyward (456) and if we connect the dots here, maybe there isn’t much of a coincidence that the rest of the Cubs outfield defense improved, too.

It was apparent that center fielder Dexter Fowler was an obvious beneficiary of Heyward’s defensive prowess at his side. Fowler had his best season as far as metrics are concerned, but he also saw his plays out of zone drop from 80 to 49.

Let’s take a look at some charts.

You can see where Heyward’s defense bleeds a bit into Fowler’s center field area. But you can also see where Fowler was able to make plays in the gap toward left-center. It all adds up to Fowler and Heyward covering a lot of ground in 2016.

The Cubs also provided improved defense in the other corner outfield spot. Cubs left fielders ranked seventh in the NL in DRS (%), but first in UZR (12.2) and Defensive Runs Above Average (4.3). Their best defensive left fielder might have been the player who spent most of the year at third base. Kris Bryant played only 353.1 innings in left and only Jorge Soler (371) played more out there for the 2016 Cubs.

All things considered, isn’t this how the Cubs’ defensive alignment was supposed to work out all along?

Heyward’s range and ability was supposed to make it easier on Fowler in center field. In turn, that would make it easier on whoever was patrolling left field for the Cubs. In the end, it was a true team effort that saw the Cubs outfield defense improve to the point where it wasn’t detrimental to its championship aspirations.