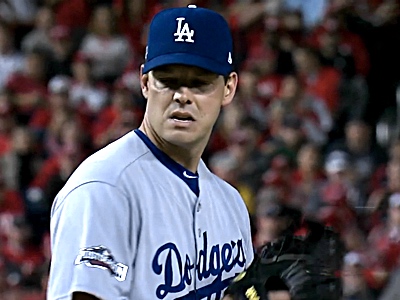 And just like that, the best free agent starter is off the board.

According to various reports on Twitter, later confirmed by the Dodgers themselves, the Los Angeles Dodgers have re-signed free agent starter Rich Hill. He gets a three-year, $48 million deal. Not bad for a guy whose career was thought over just a couple years ago.

It’s a healthy investment from the Dodgers, but Hill reinvented himself in the biggest possible way with the Red Sox, A’s and Dodgers over the past season and a half, and this seems a like a worthwhile risk.

… but I’ll still let you be amazed and moderately surprised by the price he was able to command. Despite his excellence in 2016, Hill is almost 37 years old and has just 292.1 innings pitched in the Majors since 2008 (!).

And that’s not even the half of it:

Rich Hill is older than Carlos Zambrano, Josh Beckett or Dan Haren. He's older and has fewer major league strikeouts than Mark Prior.

Clearly, the Dodgers (and the rest of the market) felt like Hill was a good enough bet to provide enough (but not a full slab of) hopefully dominant innings throughout the course of the the next few seasons:

#Dodgers believe Hill can give them at least 120 high-quality innings per season, and that their depth can make up for any lack of quantity.