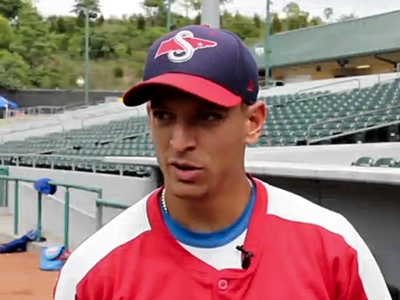 The Rule 5 Draft just wrapped up, and the Cubs were actually pretty involved.

Although they didn’t make a selection of their own in the Major League portion of the draft, they did leave with one of the selectees, Yankees lefty Caleb Smith, whom the Brewers selected 7th overall (more on that in a minute). The Cubs also lost (for now) Triple-A reliever, Armando Rivero, to the Atlanta Braves.

During the Minor League portion of the draft, the Cubs selected 24-year-old Yankees infield prospect, Kevin Cornelius with the 30th overall pick, but lost a 24-year-old infield prospect, Daniel Lockhart, of their own. Let’s take a look at each selection and loss in the draft to see how and who ended up where.

In the Major League phase of the draft, the Cubs did not select a player, but they did lose right-handed,Triple-A reliever Armando Rivero to the Atlanta Braves with the fifth overall pick.

If the Braves can find a way to keep Rivero on their Major League (i.e. 25-man) roster for the entire season, he will be a Brave for good (well, until he’s let go or reaches free agency, that is). If, however, he isn’t able to make it in the Majors this season and the Braves are unable to carry him, he will be offered back to the Cubs for a fee (selecting a player costs $100,000 – getting the player back costs $50,000).

If Rivero is a name with which you’re familiar, I wouldn’t be surprised. Now a 28-year-old reliever, Rivero has spent two and a half seasons at Triple-A Iowa, teasing Cubs fans with his 94-97 MPH fastball, a hard-slider, and a split-change. In two of the past three seasons, he posted strikeout rates over 36% and ERAs under 3.00. Last year, he finished with a 2.13 ERA and a 2.84 FIP. He was probably destined to be taken in this draft.

It’s worth pointing out, however, that his walk rate has been above 12.5% for the past two seasons (in Triple-A), so perhaps the Cubs weren’t interested in seeing that exploited at the Major League level. After all, it wasn’t ever entirely clear why the Cubs never gave Rivero a chance when they were shuttling other relievers in and out these past two seasons. Other than the walk rate, they must’ve seen something we can’t quite get from a stat line – but he’ll finally get his chance in Atlanta.

Despite not making a selection themselves, the Cubs did not come out of the Major League portion of the draft empty handed. Instead, with the seventh overall pick in the draft, the Milwaukee Brewers selected left-handed Yankees’ swing man Caleb Smith … and traded him to the Cubs for cash considerations.

In exchange for Smith, the Cubs are sending cash to the Brewers, who made the selection for them. This was clearly one of those pre-arranged deals, where the Cubs knew the guy they wanted, and also knew he wouldn’t last to their 30th overall spot. That’s a good indicator of how the Cubs feel about Smith. The Brewers get some cash and some good faith with the Cubs for helping them out.

In Smith, the Cubs get another left-handed option for the bullpen, and an opportunity to see what he has in Spring Training. If he looks good or there’s a rash of injuries, it’ll be nice to have him available. If, however, it’s clear he won’t make it with the Cubs for the long haul, very little was lost in the effort.

It’s possible that the addition of Smith means the last little chance for a reunion with Travis Wood is now out the door, as Smith is also left-handed swing-man (coincidentally, Smith throws lefty, but swings right just like Wood). It was a nice five years for Wood, who helped Chicago get its ring, but he may find opportunities elsewhere now.

Cornelius was drafted in the 31st round of the 2013 draft, and just finished a full season at High-A. Although the numbers looked great on the surface (.277/.374/.493), Cornelius, 24, is not on the young side for the league and also struck out quite a bit 25.1%. But that’s sort of the deal with players selected in the Minor League portion of the draft – they may have a few interesting qualities, but they’re going to have their bruises, as well.

In the third round of the Minor League phase of the draft, the Arizona Diamondbacks selected infield prospect Daniel Lockhart from the Cubs. Lockhart, 24, was a second base prospect for the Cubs who reached Double-A for the first time in 2016.

All in all, the Cubs’ Rule 5 Draft this year was something of a net neutral. They lost a Triple-A reliever in Rivero, but gained arguably a better fit in Smith. Then, they lost a 24-year-old, Double-A infield prospect in Lockhart, but gained one in Cornelius. Rivero might come back, and Smith might not stick around, but Lockhart is gone and Cornelius is here to stay.

And that’s the Rule 5 Draft.