Five Years Ago, the Cubs Were About to Acquire a Franchise-Altering First Baseman Skip to content 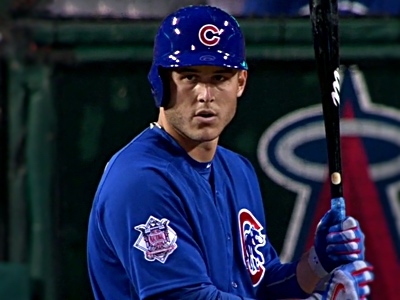 It’s difficult – if not impossible – to identify the most important player to the Cubs’ 2016 World Series Championship, because frankly, there were a lot of contributors. [Brett: The fact that eight different players drove in the Cubs’ eight runs in Game Seven pretty much sums it up.]

On the pitching side, you could probably point to someone like Kyle Hendricks or Jon Lester, while on the positional side, well, I’d guess that you’re first choice would be Kris Bryant. Not a bad pick, after all.

But of course, there’s at least one more position player who was instrumental not only to the 2016 regular season and World Series win, but to the rebuild as a whole.

As the Cubs’ official-unofficial team captain – and longest-tenured member of the team – Rizzo was the very first core piece established at the Major League level for the current Cubs, especially considering Starlin Castro’s struggles and eventual trade to New York. But unlike some of the other core pieces, of course, Rizzo wasn’t drafted or signed. He was acquired in a trade that would go onto to define the rest of Cubs history.

Let’s talk about that.

At Vice Sports, Mike Pielucci writes about the 2011 Anthony Rizzo trade, and how it shaped the rest of the Cubs’ roster and future. With quotes from the men involved in making the trade, Pielucci lays out how it happened, and what it’s meant.

“We were very focused on putting together a group of young position players, and he was the first piece of that,” Cubs General Manager Jed Hoyer told Pielucci of Rizzo, acquired in primary part for Andrew Cashner. “Anthony was the first guy we went out and got, and I guess it did start that movement toward having this really good young core of position players.”

Of course, unlike Kris Bryant, for example, Rizzo didn’t immediately have huge success upon reaching the Majors. In his first full Major League season (2013), Rizzo was still the caterpillar version of himself, slashing .233/.323/.419 with huge struggles against left-handed pitching: 75 wRC+ and .282 wOBA. But over the 2013-2014 offseason, something changed (well, his swing, stance, approach – all of it really – which was the culmination of work that began his first offseason with the Cubs) and he turned into a monster.

And those changes didn’t go unnoticed.

“As much as any player I can remember, [Rizzo] totally changed his swing and approach after already reaching the major league-level,” Josh Byrnes (GM of the Padres at the time of the trade) said of Rizzo, per Pielucci. “Credit to him for diagnosing a potential problem and finding a solution.”

The next season, for example, Rizzo had a 165 wRC+ and a .411 wOBA against lefties … in other words, he was not only better than the 2013 version of himself, but he was also better against lefties than he was against righties that season.

But what made Byrnes trade Rizzo in the first place?

1) Rizzo’s Rough Major League Debut: Well, if you remember, the Cubs’ current GM Jed Hoyer, traded for Rizzo from Boston (and thus, Theo Epstein) a year earlier, in a big five-player deal that sent Adrian Gonzalez to the Red Sox. Widely heralded as the next-big-thing for the Padres, Rizzo’s Major League debut was a huge disappointment. In just under 50 games, Rizzo slashed .141/.281/.242, struck out over 30% of the time, and was worth negative 0.5 WAR.

2) Hoyer’s Departure for Chicago: Following the 2011 season – a.k.a. Rizzo’s MLB debut – Jed Hoyer left the San Diego Padres after some “internal power shifts” for the same role in Chicago. Now, the two executives – Epstein and Hoyer – who’d twice acquired Rizzo, were in the same place, hungry to acquire him for the third time. In the piece, Hoyer shares just how much he believed in Rizzo’s ability and makeup.

3) Padres Acquire Yonder Alonso: On December 17, 2011, new Padres GM Josh Byrnes sent Mat Latos to the Reds in a deal that, among other things, netted the Padres right-handed hitting first baseman, and Reds top prospect, Yonder Alonso. Alonso, according to Byrnes, had an approach at the plate that was better suited for the cavernous Petco Park, and quickly moved ahead of Rizzo on the team’s depth chart.

Then, 20 days later, Anthony Rizzo was a Chicago Cub.

But make no mistake, there’s more to the story than this. Head over to Vice Sports to see which other teams were interested in Rizzo, how quickly Jason McLeod and Jed Hoyer jumped at the opportunity, and so much more surrounding one of the most fateful trades in Chicago Cubs history. (And that’s definitely not an exaggeration now.)

Anthony Rizzo is probably already among the all-time Cubs fan favorites, so take some time to see how he came into your life.