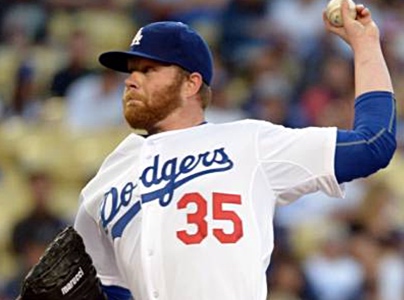 Well how about that? As we talked about this morning in the Bullets, the Cubs are in relatively dire need of certain kinds of depth starting options like Brett Anderson, a pitcher we wondered about in connection with the Cubs last week.

Anderson would add to #Cubs’ rotation options, but his physical will be critical. Has appeared in only 65 games past five seasons.

Getting Anderson into the fold, in any capacity, would be a great move for the Cubs, who presently have very little in the way of established, big league rotation depth. Because of his injury history, there’s a lot less certainty with Anderson than you’d normally like to see from a “depth” starter, but at least there’s plenty of upside.

The question here – yet unanswered – is what kind of deal it will take to sign Anderson, who essentially did not pitch last year after finally putting together a mostly healthy (and very effective) season with the Dodgers in 2015. No sense in reinventing the wheel, so here’s much of what I wrote last week on Anderson:

“Anderson, who is incredibly still only 28, was drafted by the Diamondbacks, but came up with the A’s. There, he made his bones as one of the better young pitchers in the game, before succumbing to a spate of injuries that limited him to just about 320 innings (a good season and a half’s worth) from 2010 through 2014. In 2015, with the Dodgers, he managed 180.1 innings of effective ball, which was sufficient to net him a qualifying offer, which he accepted.

In 2016, he managed just 11.1 innings spread across four outings in late August and late September thanks to back surgery in the spring.

The injuries for Anderson have been an interesting thing, as the biggest time-sucks have been a foot injury, an oblique injury, a back injury, and 2011 Tommy John surgery. That is to say, you wouldn’t necessarily look at him and say that he’s a typical “injury-prone” pitcher (as in, a guy who has chronic arm problems – the stuff you expect to show up again down the road). That doesn’t mean you can dismiss all the injuries as flukey and entirely unrelated, though. And back issues can certainly be chronic, even after surgery.

As for his pitching, well, sure, he’s solid. He’s got a career 3.86/3.70/3.55 ERA/FIP/xFIP slash line, and has demonstrated the ability to be a good middle-of-the-rotation starter when healthy. But, as we just went over, he has almost never been healthy for a full season in his big league career.

If the Cubs want to bring him in on a minor league deal in the hopes that he’s healthy, that’s certainly fine by me. And, as was the case with Tyson Ross, the Cubs would have the luxury of giving Anderson starts – to rest the other five starters – to see where he’s at in April and/or May, but wouldn’t necessarily be leaning on him to be one of their front five starters.

As things stand with the Cubs, their greatest pitching need is quality starting pitching depth. Anderson is, to me, less that than he is an upside play – like, he’s a guy who is a solid rotation member (even on the Cubs) if he’s healthy. But, since you cannot count on him to be healthy, his presence doesn’t necessarily help on the depth front. (Which is complicated by the fact that he’s not a guy you could option up and down from AAA.)

In the end, it’s all about the contract and the role. Upside play to see where he’s at this spring? Absolutely.

Counting on him as the primary depth/definite 5th/6th starter for the rotation? That would not be prudent.”

So, then, Anderson is not the perfect depth option for the Cubs’ needs, but that doesn’t mean he’s not worth pursuing.

Now we await the results of the physical, and what the deal looks like. Pending those … I am very pleased.

Even if Anderson cannot be counted on as the 5th starter (or 6th, or 5.5th, depending on how the Cubs want to dole out starts among the front four and Mike Montgomery), the low-risk upside of getting a mid-rotation guy – even if only for 15 starts – this late in the offseason is fantastic.

UPDATE: A thinking-on-the-fly kind of thing, and not so much a news update: you are reminded that the minimum stay on the disabled list has been reduced this year from 15 days to just 10 days, which may amount to only one missed start. For a guy with myriad injury issues, the ability to DL him a little more proactively without crushing the rotation is huge, especially if you’d like to keep him going for the full season.

discussion was about low base plus incentives #cubs https://t.co/I9Bshi6oL8

UPDATE 3: So it is, very reasonable:

Source: Brett Anderson's deal with the Chicago Cubs is for $3.5M, should he pass his physical. Incentives can take it up to $10M.

At $3.5 million, the pain of having to eat Anderson’s deal if he simple cannot be given a 25-man roster spot out of Spring Training (but is not injured) is minimal. We’ll see what levels trigger the incentives, but if he can make 15 or so starts this year, he could easily prove to be worth much more than $10 million.

As it stands, I’m a big fan of this signing – and it looks like Anderson kind of fell into the Cubs’ lap.