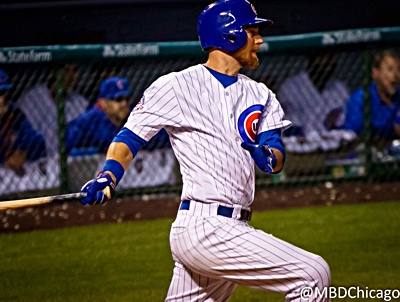 They didn’t know it at the time, but they were getting some payback …

You see, Washington Nationals starter Max Scherzer had a great year in 2016. He was brilliant in the middle of the season, he was solid down the stretch, he logged the fifth 20 strikeout game in big league history, and he ultimately won the Cy Young Award handily.

That win came over the two other finalists, both Chicago Cubs pitchers, Jon Lester and Kyle Hendricks. I won’t say it wasn’t deserved, but I will say that rivalry-type-things are fun, and thus *shakes fist angrily at Max Scherzer*.

And, as the opening line teases, perhaps the Cubs got their payback on Scherzer way in advance.

When the Nationals visited Wrigley Field in early May, the two teams wound up playing one of the more memorable series of the year – for the Cubs at least. That was the series with the Javy Baez Mother’s Day walk-off, the walk-a-thon that broke Bryce Harper, and a four-game sweep for the Cubs that cemented them as the best team in the NL, even at such an early date in the season.

The series also included Max Scherzer’s worst start of the year: 5.0 IP, 7 H, 3 BB, 7 K, and 4 HR. That marked the lowest game score (29) of his Cy Young season, and the Cubs won the game 8-6 on a very windy day. Those four homers came courtesy of Tommy La Stella, who got things started, Ben Zobrist, who homered twice, and Anthony Rizzo, who took one way up off the flags atop the right field foul pole.

If you look very closely, you can see me just behind the folks who snagged Zobrist’s first homer. I did not make a strong effort for that ball, but, in my defense, there was a beverage present.

Had the ball been just a touch closer to me, I swear I would have done the thing where you catch it in the cup, and chug the beer. Because rules.