Kyle Schwarber Working in the Outfield, the Position We Should Probably Talk More About Skip to content 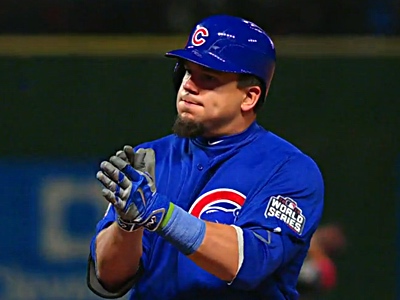 Although the defensive talk about Kyle Schwarber this offseason has mostly been about whether he’ll be able to – or given the opportunity to – catch a few games here and there next season, everybody knows the score. The default assumption right now is that Schwarber will primarily, if not exclusively, be a left fielder in 2017.

We probably don’t talk enough about the plans for Schwarber in the outfield, and their relationship to his recovery.

It’s worth remembering that, although he was a Disney story at the plate in the World Series, Schwarber was not cleared to play defense in the outfield. Even now, he’s barely 10 months removed from a serious knee injury; so serious that the initial talk after the injury and surgery was about a hope and expectation that he should be ready for Spring Training. What he did in the World Series should not allow us to totally forget that he’s still working his way back from this thing.

Furthermore, even when he was healthy, the plan was for Schwarber to catch just about once per week, as he was still developing behind the plate. For the most part in 2016, he was going to be in the outfield.

That is all to say, tracking Schwarber’s recovery and ability to play in the outfield is going to be a much more important story this spring than whether he sees any time behind the plate (even if that is understandably a compelling to discussion.)

To that end, Schwarber discussed his defensive future today on The Score, indicating that he’s scheduled for a medical evaluation with the team doctor this spring, and then decisions will be made together with the front office about where he’s going to be eligible to play. I’d say that it’s just about impossible he’ll come out of that meeting with catching gear on, but then no one was expecting his NLCS meeting with the doctor to lead to a surprise availability for the World Series.

Schwarber says he still has a passion for catching, but he knows the organization might decide that it’s best for his health to stay in the outfield. On that front, he’s already working in the outfield, catching fly balls, and he believes he can have a solid defensive future out there. Before the injury, you’ll recall, there was a whole lot of chatter about his defensive struggles in the 2015 postseason – but there was no reason to believe he couldn’t at least become a near-average defender in left field. Read that link there for much more on Schwarber’s outfield defense, and about reasonable expectations.

Here’s hoping he continues to progress, both in his injury recovery and in his defense out there. Whatever we might learn about his ability to periodically catch in 2017 (and, let’s be honest, having a third catcher on the roster is a really nice luxury for a manager as open to moving guys around in-game as Joe Maddon is), I’ll probably be most interested in seeing how he looks in the outfield.

Schwarber got into more in the interview, which you can listen to here.