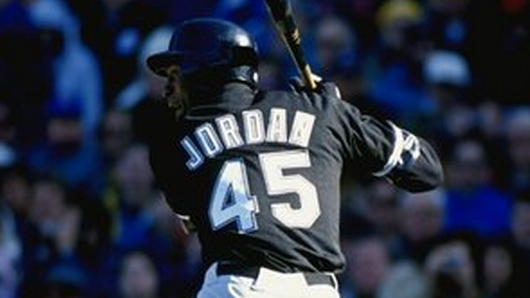 [Ed. – Originally published four years ago, I think this is worth sharing again on this, the anniversary of Jordan signing with the Chicago White Sox. Enjoy.]

I’m not a basketball fan. I played it when I was a kid, and I follow the sport at the college level and in the NBA with a passing interest. I know enough to speak intelligently about the sport, but probably no more than your average American male. I think that context is probably important for you to have when you see me saying things like that headline up there. I’m a baseball guy. I know baseball. I view the world through the lens of baseball.

That said, I have thought for years that Jordan’s stint in professional baseball is one of the most impressive feats in all of sports. As he celebrates his 50th birthday, I think it’s worth contextualizing just what he accomplished on the diamond, and underscoring how crazy amazingly talented Jordan must have been.

That Jordan was an all-universe basketball player is, on some level, to be expected. In a population of elite basketball players, a handful of them are going to be “the best.” Indeed, by definition, that happens.

You know what doesn’t happen?

One of those “best” basketball players picks up a bat and can instantly compete with professional baseball players at age 31, when he hasn’t played the sport competitively in over a decade.

Still, the walk rate was impressive, especially for a guy just picking up the bat. He didn’t strikeout at an obscene rate, and his batting average was actually better than you might think – the Birmingham Barons’ average that year was just .248. Their park was considered pitcher-friendly.

But let’s set aside the numbers. Let’s grant that they’re terrible, and go as far as to say he would have been one of the worst players in the league. Professional ballplayers – even those at AA – have been honing their craft for years. For all their lives, really. Compared to the general population, the average AA player is Babe Ruth. The best AA players are big league caliber, and the worst AA players are still better than 99.99% of people who’ve ever picked up a baseball.

Michael Jordan, after dedicating himself to basketball for the previous 13 years, picked up a bat and joined that 0.01%. He competed, passably, with some of the best baseball players on Earth, having not played with or against them since he was a teenager (and, even then, what was the talent level against which he was playing?). That’s the kind of accomplishment that is so difficult to contextualize that it is probably massively underappreciated.

I’m sure that what Jordan did on the court was amazing. And it’s a fair guess that what he did in professional basketball may never be duplicated.

But what he did in professional baseball? That’s an even better bet to never be duplicated.