Another Concert Added at Wrigley Field, Which Means No More New Night Games for 2017 Skip to content 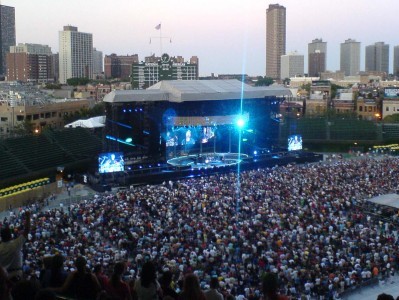 Florida Georgia Line, together with the Backstreet Boys* and Nelly, is coming to Wrigley Field on August 12, which means The Friendly Confines will be home to a whopping 10 concerts this season. That’s a significant boon to Cubs-related revenues, and figures to generate substantial funds that will eventually trickle their way into baseball operations, to the extent necessary.

With the 10th concert added to the schedule, Danny Ecker points out that the Cubs can no longer add another night game this season, even if a separate night game is rained out and rescheduled:

Cubs now at Wrigley concert max. So rain-outs rescheduled as night games would cost them night games next year. https://t.co/Eke6SxVAuH

Hopefully, then, the weather will be kind in the evenings. In terms of revenue, though, a rainout would cost the Cubs only the difference in value between a night game and a later-rescheduled day game, which is not necessarily substantial, even if mildly inconvenient for fans. Given a previous estimate that each concert nets the Cubs upwards of $1 million, you can see why the Cubs would be willing to roll the dice.

If it feels like concerts at Wrigley Field have exploded in recent years, that’s because they have:

The Cubs have gone from 3 Wrigley Field concerts 3 years ago to 10 this year. https://t.co/MoVtxVA2Rp pic.twitter.com/qRlIaofY8l

Wrigley is often held up as one of the best stadium concert venues in the country, so good on the Cubs for taking advantage of an asset that people love, and that would otherwise lay fallow most days of the year.