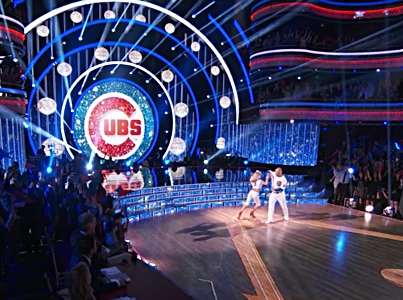 I am not the least bit into the show – I’ll admit that I was a theater nerd in high school, but this kind of dance competition was just not my thing – but I wanted to watch for the Cubs-related spectacle.

And although I can’t say I’m hooked on the show, I will say (1) it was more fun than I expected, and (2) Ross’s performance was great!

If you didn’t watch, enjoy:

As you could see, the performance was well-received, and the pair actually received the highest score of the night at the time they performed. A couple other pairs netted a higher score by the end, but (what do I know?) I think it was a really impressive debut for a baseball lifer.

Ross’s friends and former teammates were impressed when they dropped in with a surprise video call in the live broadcast:

I laughed. I can only imagine the ABC executives tugging at their collars when Jake Arrieta complimented Ross for “having the balls” to go on the show. (Also, was that Tommy La Stella in the background?)

All in all, it was a light, fun night:

I wanna dance with somebody … pic.twitter.com/nrUjBfal4x

Over here trying to figure out who had the better dance moves tonight, David Ross or Javy Baez. pic.twitter.com/F1bwmtjeAA