"Wheels" Schwarber Bunts for a Hit to Lead Off the Game, Later Homers (VIDEOS) Skip to content 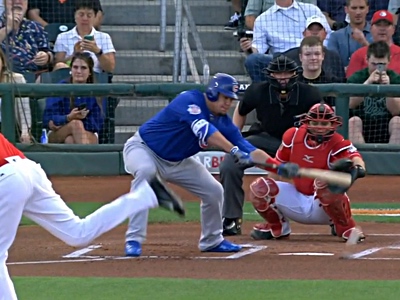 Kyle Schwarber is really getting into this leadoff batter thing, eh?

After filling up his Spring Training with leadoff-man-caliber triples, now Schwarber is getting into the other finer points of being a “traditional” leadoff man.

How about the surprise bunt down the third base line to lead off the game:

I joke about that being a “leadoff” hitter thing, because, as a matter of fact, that’s just a smart lefty slugger thing. If a team is going to do the extreme shift, and you’re leading off an inning in a close game (especially when you’ll typically have mashers behind you in the lineup), you might as well take that free base if you can get a bunt down.

Very nicely done by Schwarber, not only tonight with a perfect bunt, but also because he’s now planted that seed. This is something he will do, other teams. Be advised.

Of course, then Schwarber proceeded to get thrown out trying to steal second base, so he might have to mostly stick that part of being a leadoff hitter in his back pocket.

UPDATE: As this was publishing, Schwarber decided to show off the fact that he’s not just a one-trick speed pony by rocketing a homer to right field:

That thing was a torpedo. And apparently it ripped open the heavens, because the game was almost immediately called thereafter.