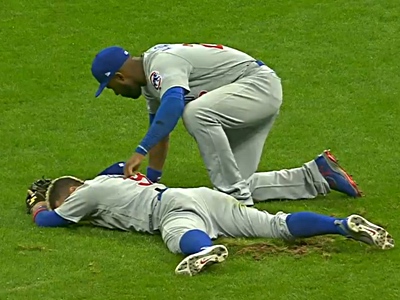 A scary moment in tonight’s game, as a no-man’s-land blooper to shallow center field was just out of reach of a retreating Javy Baez and a charging Jason Heyward. The two collided, with the bulk of Heyward’s body crashing into Baez’s head, and twisting him awkwardly. Baez was clearly shaken, and after a brief discussion with Joe Maddon and the Cubs’ trainer, Baez departed.

Here’s an early video of the play:

Heyward stayed in the game, and seems unharmed. With Baez, what you’re concerned about is a concussion, given the force with which he absorbed the collision, and then how he was shaking his head after the fact.

We’ll have more when it’s available. In a horrible coincidence: one year ago today, Kyle Schwarber collided in left center with Dexter Fowler.

UPDATE: The Cubs are evaluating, but no details yet:

We'll update his condition when we know more.

UPDATE 2: You can watch the full video of the play here.

UPDATE 3: The official early diagnosis from the Cubs:

Taken literally, that would be a bruise to the eye. Which sounds remarkably unpleasant. It looked more like Baez took the shot to the left eyebrow, which may actually be where he’s bruised. He’s probably going to have a black eye.

In any case, here’s hoping that a good night’s rest will have Baez feeling better, and there will be no other head-related issues. Either way, I wouldn’t necessarily expect to see him in the lineup tomorrow.

Given how bad the collision looked, a bruised eye and a game or two missed? That would be a dream scenario.