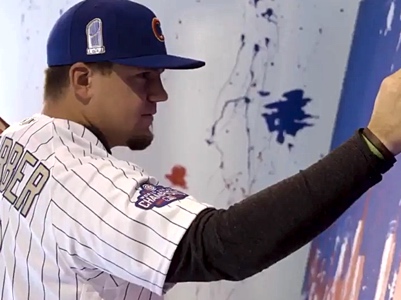 It was a busy off-day for a number of Chicago Cubs, which is the byproduct of their soaring popularity in the city.

He wasn’t the only one having a great off-day, though, as Kyle Schwarber had an appearance downtown for Lids, in which he briefly played the part of a mannequin:

Painting the town with GOLD with @kschwarb12 ! Great event today with Kyle in the @Macys window @lids @Cubs pic.twitter.com/EhUtmYwiJg

Anthony Rizzo, Willson Contreras, and Mike Montgomery greeted American Airlines passengers at O’Hare, and presumably no one needed to be re-accommodated to make the nice surprise possible:

.@Mastercard and @AmericanAir teamed up to surprise travelers at O’Hare with some special guests and giveaways. #PricelessSurprises pic.twitter.com/cqfTof9Rbm

Then there was Javy Baez, who literally had a street named after him:

That one was about a lot more than just a fun off-day moment, as Baez’s story, passion for the game, and work ethic make his a perfect name to adorn the street along Little Cubs Field in Humboldt Park (Cubs.com):

[26th Ward Alderman Roberto] Maldonado explained Baez’s story, and how Baez had promised his father, who he lost when he was 11, that he would provide for his family. Baez also vowed to his sister, Noely, that he would take care of her. She died in 2015 at the age of 21.

“It is more than just the game of baseball,” Maldonado said. “For Javy, it is the spirit of his beloved father and sister that gave life to the game and helped him achieve greatness. Javy is such an inspiration to so many young people who have faced tragic times and had to deal with losses.”