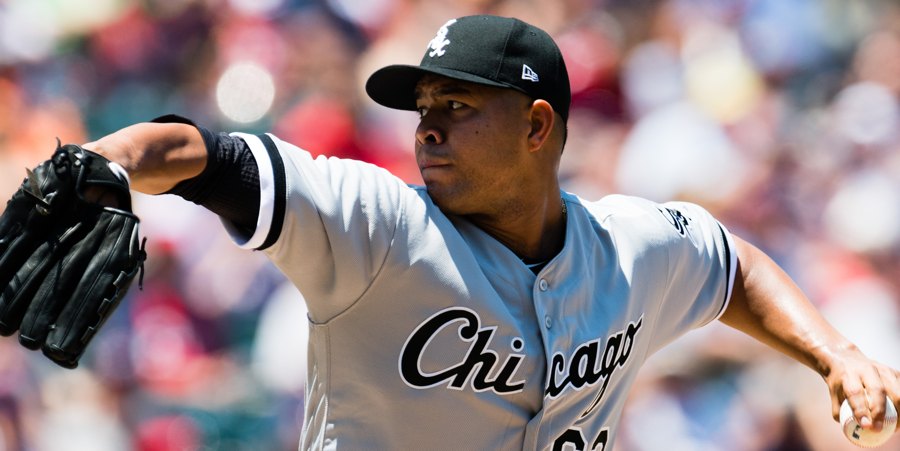 What is going on.

The Chicago Cubs have traded top prospects Eloy Jimenez and Dylan Cease, as well as Matt Rose and Bryant Flete, to the Chicago White Sox for lefty Jose Quintana.

I am in a state of shock.

To be quite sure, Quintana marks the ideal acquisition for the Cubs. He’s consistently very good. He’s 28. He’s under reasonably priced team control through 2020. This is the perfect guy for these Cubs to target.

It’s just that, given his now previous team, a trade with the Cubs seemed extremely unlikely, as each front office has acknowledged the difficulty in making a deal of this magnitude work for both sides with the risk of creating stars across town. I think that concern was always a little less for the Cubs, so that’s probably why it works this time: Quintana, although excellent and known as very good among thoughtful baseball followers, is not necessarily a “name” star like, for example, Chris Sale. And if prospects sent to the White Sox become future stars, it probably burns the Cubs a little less than it would the White Sox if the reverse were true, given the relative attention paid to each team.

Still. Given the market for Quintana, the timing of the deal, and the massive costs involved, this is a surprise.

In Quintana, the Cubs are getting a lefty starter who has been worth nearly 5.0 WAR in each of the last three seasons, and, after a slow start this year, has gotten himself back on that pace again this year.

For his career, Quintana has a 3.51 ERA, a 3.52 FIP, and a 3.82 xFIP – aka, consistently very good and very steady. Although those numbers have taken a hit this year, he’s got a 2.70 ERA since the start of June. His strikeout rate is up a bit this year, though his walk rate and home run rates are also up.

We’ll dig in on him so much more soon [UPDATE: And Michael’s got more Quintana for you here]. Hopefully the fact that he doesn’t have to move cities will help him incorporate that much more quickly with his new team – always something you have to consider in these moves.

The cost of acquiring Quintana was understandably enormous, though certainly not unfair. Jimenez is a top 10 prospect in the game, and the upside in his bat is right there with any offensive prospect you could find. He hasn’t yet reached AA and is just 20 years old, so there is still some risk. But if you’re asking me to bet, I think he’s a future offensive star. On the Cubs, his spot in the future was a little murky, so the Cubs are betting more on Kyle Schwarber and Ian Happ right now than on Jimenez. (And, if you’re an extreme dreamer, Bryce Harper?)

Cease has an electric arm, and is almost certainly going to pitch in the big leagues. The question that will follow him in the coming years is whether he can stick as a starter, or whether he’ll eventually move to the bullpen. I love the upside there as a front-of-the-rotation type, but there was always plenty of risk, too. As a trade piece – even as the Cubs need waves of pitching – I’m comfortable with his inclusion.

Rose has some nice physical projection – he looks like Kris Bryant – but has yet to put together the kind of elite offensive numbers you’d want to see in the low minors from a bat-first prospect. Flete, 24, is an infielder putting up decent numbers in High-A, but he is not currently regarded as a significant prospect.

Taken all together, given the price tag I would have put on Quintana when I thought the Cubs had no chance to get him because of the White Sox’s preference not to deal with them, this is what I would have expected a Quintana trade to cost. At first blush, this really was a reasonable price to pay. It stings, of course, but it was fair. And, again: Quintana was basically the perfect trade target for the Cubs.

As for the timing and scope of the deal, the Cubs are clearly still very much all-in on 2017. Yes, getting a guy like Quintana – wow, I still can’t believe they got Quintana – is as much about 2018-2020 as it is this year, but buying him now means paying a premium for the value he could have provided other playoff contenders this season. The Cubs want that value. And they don’t want another team – say, weren’t the Brewers rumored to be in on Quintana? – to get it.