He Did It! Anthony Rizzo Wins Roberto Clemente Award Skip to content 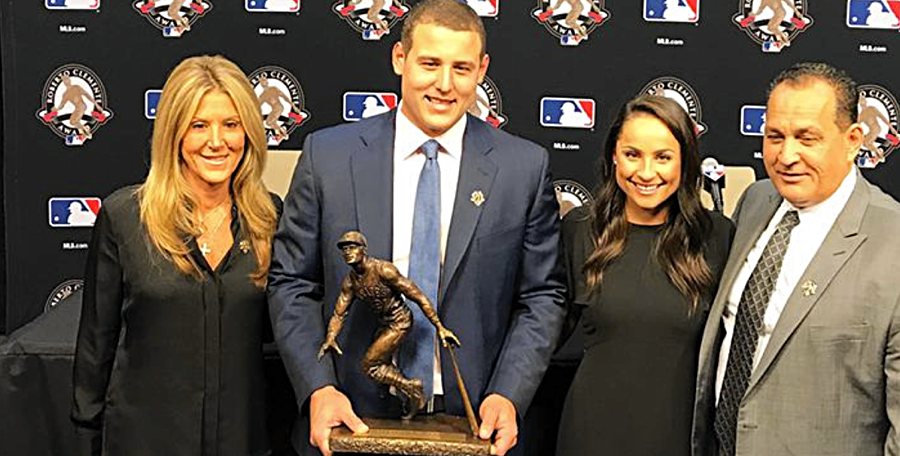 On the field, Anthony Rizzo is a Gold Glove-winning, slugging first baseman, but it’s his off-the-field contributions that have allowed him to win baseball’s Roberto Clemente Award.

And he earned it. pic.twitter.com/m3YOYKiniK

.@ARizzo44 wins the Roberto Clemente Award for positive contributions to baseball on and off the field. pic.twitter.com/bYxNKeL4vd

The award is voted by fans and media members and is supposed to best exemplify the game, sportsmanship, community involvement, and the player’s contributions to his team. It is named after the legendary Pittsburgh Pirates Hall of Fame right fielder who died on December 31, 1972 when his plane carrying supplies to Nicaragua after an earthquake crashed into the Atlantic Ocean.

Rizzo, a survivor of Hodgkin’s lymphoma, is a worthy recipient for this prestigious and coveted honor. In 2012, he created the Anthony Rizzo Family Foundation which helps support children battling cancer and fund cancer research. This past August, the foundation announced it was handing over a $3.5 million gift to Lurie’s Children’s Hospital in Chicago.

And even as recently as this week, Rizzo sent a fan battling cancer a signed jersey and a photo to replace one that was lost.

Rizzo, who will be presented the award before the start of World Series Game 3 in Houston, joins Rick Sutcliffe (1987) and Sammy Sosa (1998) as Cubs to receive the honor.

Rizzo has previously mentioned how important it would be for him to win this award, so I would imagine he’s pretty touched tonight. And he deserves it.