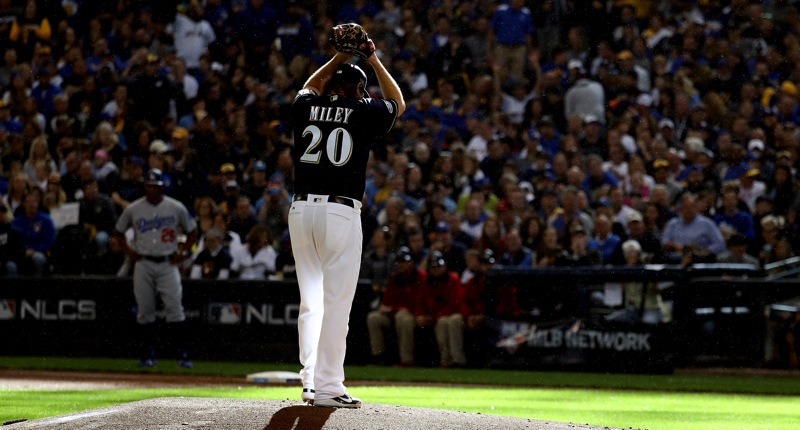 If Wade Miley pitches in 2019 like he did when he finally got on the mound in 2018, the Astros just got the bargain of an offseason full of bargains:

Wade Miley has a one-year, $4.5 million deal with the Houston Astros that includes $500,000 in incentives, league sources confirmed to ESPN. The Astros needed pitching, and they bring in one of the biggest surprises of last season in Miley. @Ken_Rosenthal and @BNightengale on it.

Miley, 32, put up a 2.57 ERA with good peripherals in the second half last year for the Brewers on the strength of a revamped cutter, which just brutalized righties. Think he’ll regress under the Astros’ pitching tutelage? I doubt it.

The Brewers are reportedly still considering adding another starting pitcher, and a re-up with Miley always would have made sense. Until and unless they make a trade, it seems like the Brewers will ride with five of Jhoulys Chacin, Chase Anderson, Zach Davies, Brandon Woodruff, Corbin Burnes, Freddy Peralta, and a possibly healthy Jimmy Nelson. The group has plenty of upside to be a solid rotation, especially if the bullpen can keep doing what it did last year and allow for short starter outings. I would have been more nervous if they’d retained Miley, though.

And that brings us to an indelicate discussion about starting pitcher price tags this offseason.

The Cubs had to make their $20 million decision on Cole Hamels back in November, and the relationship of the buyout payment from the Rangers offered them a peculiar opportunity to trade Drew Smyly at the time to save $7 million. If you figure Smyly otherwise would have been worth something like $3 million to a non-Rangers club, then it looks like the Cubs spent about $16 million for one year of Hamels.

Would you rather have Miley at $4.5 million and then another $11.5 million to spend on the bullpen (or something bigger)? You could make the argument that each lefty had a good track record in the past, before hitting a blip, and then having a really fantastic second half of 2018. Hamels has the better past, and probably projects to be better in 2019 based on the stuff, but Miley has three years on him, and is going to make a load less. You never know.

The Cubs front office would have had to anticipate this move in the market and also then would have had to risk not landing a guy like Miley if they hadn’t taken the bird in hand. On the whole, I liked keeping Hamels around, but I can’t pretend like we weren’t questioning the price tag even back then if it meant the Cubs’ spending would be as seriously impacted as it has been. We presumed that the Cubs wouldn’t have picked up the option if they didn’t feel they desperately needed a quality starter (fair, and I agreed), and that they wouldn’t have done it if they couldn’t still spend and/or didn’t already anticipate making trades so they could spend. On that part, it appears we were mistaken.

To be clear, if my only choice was Hamels or Miley for 2019, irrespective of cost, I think I’m choosing Hamels. I just feel more confident in his ability to be a decent starter, even if peak performance is no longer there. With Miley, I feel the chance for him to fall way off (or get hurt again) is higher. Moreover, I think there’s a little bit of an extra value the veteran Hamels can provide to this club at this time. Consider how he reworked his delivery last year, midseason, to gain velocity and improve his effectiveness dramatically. Dude knows some things, and maybe there’s some extra value in that.

All that said, if Miley goes on to have another fantastic year, it’ll be hard to look back and not wonder if the market wound up being even more negative than the front office anticipated back in November. (Oh, also, this isn’t just on the Cubs. Lots of teams could have taken this cheap swing on Miley, and yet this was all he could get. Clearly, plenty of teams aren’t buying that he’s going to be the guy he was last year.)