Willson Contreras caught the most innings of any catcher in baseball in 2018, and he was right around 150 innings more than the average starting-ish catcher in the league. No one can argue that Contreras wasn’t heavily, heavily used as a catcher in 2018.

Where there can be some debate is whether that usage wound up costing him productivity at the plate (and maybe behind it, too) as the season went on. All we know for sure is that Contreras’ abilities to hit the ball hard and elevate the ball completely evaporated in the second half of the season, and he started whiffing quite a bit more, too: 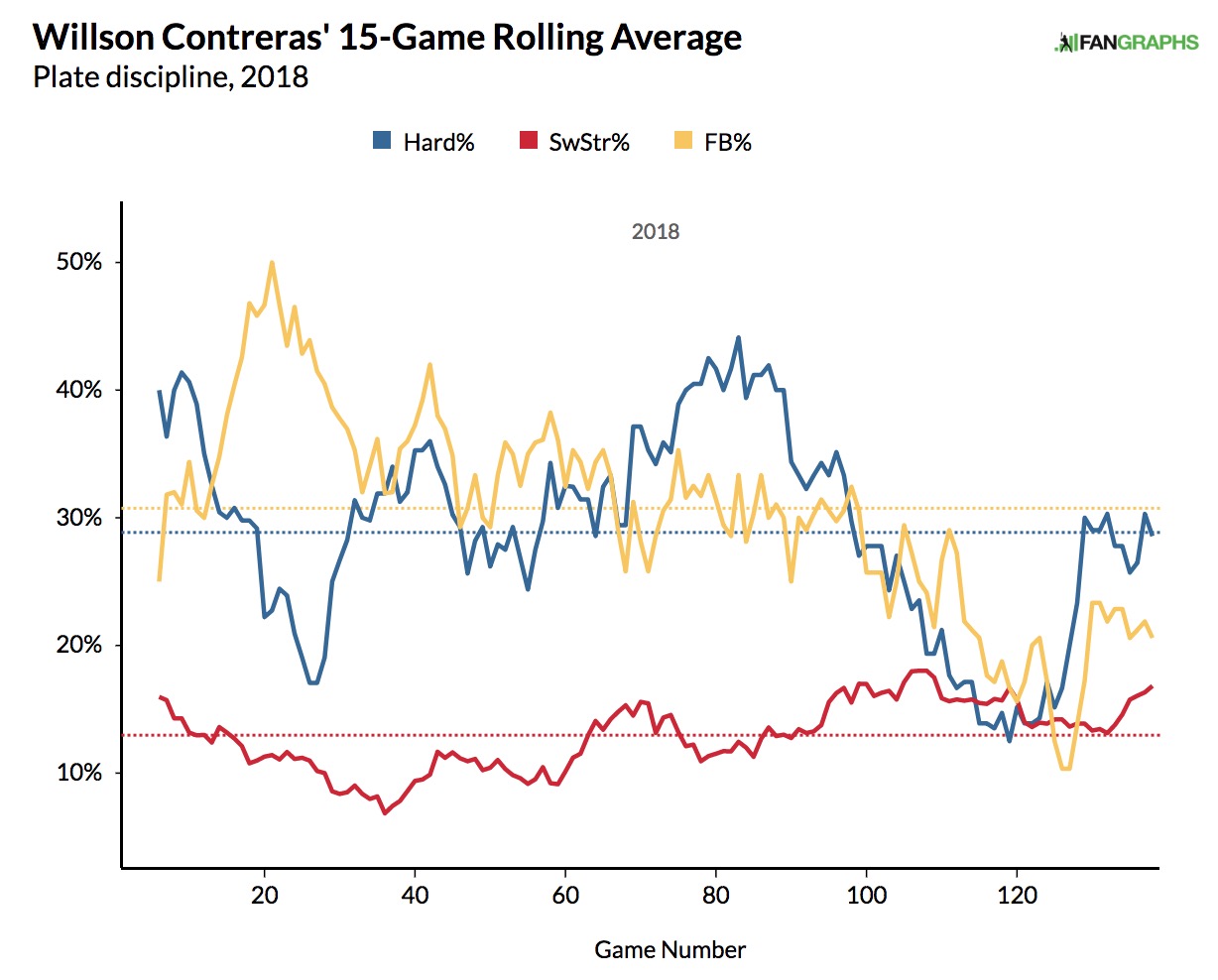 So, we know what happened to his numbers, and we know he was ridden quite hard. It’s not difficult to connect those dots, but we can at least admit that we are connecting dots, rather than pointing out a certain, factual connection.

I say it that way, because it sounds like Contreras’s manager – the man who will largely dictate the 26-year-old’s playing time this year – doesn’t really think there was a fatigue issue last year. At least a physical fatigue issue:

Maddon said he doesn't believe fatigue was a factor in Contreras' offensive struggles in 2nd half & doesn't mind that WC led league in inns caught.

"That speaks to the other catchers. Maybe you don't want somebody to catch that often on the other teams. Somebody's gotta lead."

Although the suggestion that Contreras dealt with some challenges outside the field of play last year is not a new one, it does sound new coming from his own manager, especially when pushing aside the possibility that Contreras was simply physically fatigued. Maddon was attempting to give Contreras a compliment there – someone’s gotta lead the league, and the Cubs like him so much, why wouldn’t it be him? – but it makes me a little nervous about the planned usage this year for Contreras.

Also, I’m not sure what data Maddon was looking at for the “he started only four consecutive games once” line. I count five times Contreras caught four complete games in four days: April 5-8, April 27-30, May 4-7, July 20-23, and August 24-27. That is only counting four consecutive DAYS of FULL starts, mind you. If it were just four consecutive GAMES, the number would be much larger. And several of the games in there were extra-inning games. Contreras also caught parts of nine straight days in late June, including seven full games.

Contreras is a competitor, and doesn’t strike me as the type of guy who is going to look for opportunities to sit down. But if the Cubs want him at his best throughout the season, he will simply have to get more breaks this year than he did last year, regardless of whether you want to say there’s a risk of “physical” fatigue or “mental” fatigue.

And that’s all the more reason why, if the Cubs are going with Victor Caratini as the back-up this year, Joe Maddon is going to have to give him more starts. Don’t fully trust him yet? Too bad. Give him the starts to help Caratini improve, and also to help keep Contreras fresh.