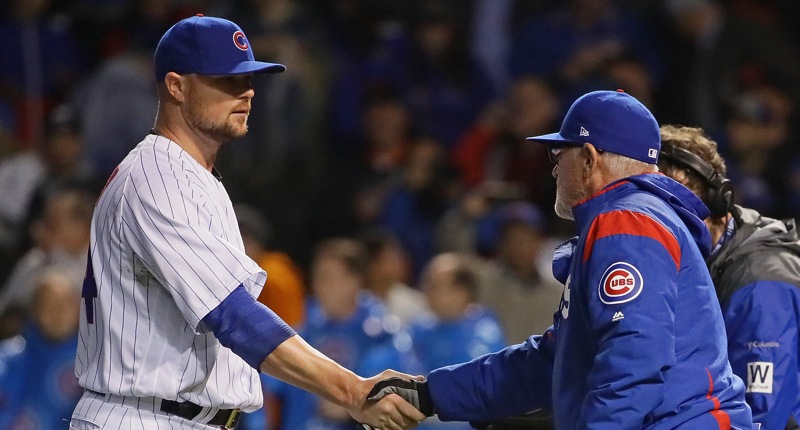 The Cubs play some REAL BASEBALL tomorrow. The offseason was chronologically long thanks to the early playoff exit, but it doesn’t feel like the wait for Opening Day was completely interminable. It was juuuuust about the right length to maximize my eagerness to see the Cubs back on the field, doing the meaningful baseball.

I love people who are completely comfortable in their own skin, & Lester is thoroughly himself. I dig that, & this is a good read: https://t.co/fJl7LEP4kC

But…the pitcher "win" stat is not the same thing as a TEAM WIN. One is a terrible arbitrary stat. The other is everything. pic.twitter.com/6zscA8BI6w

It's our annual player poll, and it's so much fun.

Manny & Bryce just signed deals worth $660 million – but you'd never know it from this poll.

And Joe Maddon almost did the impossible!https://t.co/J7BhCCLeTG

Man, reading @TheAthleticMLB today is humbling. I'm alongside some great stuff by @jaysonst @jmccaff5 @ThreeTwoEephus and so many more. I'm honored to be on this team and love it more as a reader. If you're not on board, we've got a deal (as usual) at https://t.co/MFqx62cdSx pic.twitter.com/HuB5x5mmSp

Please take a minute to learn how the @Cubs' Ian Happ is combining personal heartbreak, art, and his historic ballpark to make a difference for others. @ihapp_1 #EverybodyIn pic.twitter.com/lzJxDh0hR8

Only 4 players remain from the Cubs opening night roster in 2015 when this run started.

Bring back the home run sculpture you massive turds. https://t.co/L3HUkQYXxS

I said a funny thing, and now it's an awesome shirt. I am not humble.

Let’s have some fun … if you were a baseball player, what would you walk up to? #MyWalkUpMusic would be …