Jon Lester Showed His Ability to Adjust In-Game, Which Will Be Key All Season Skip to content 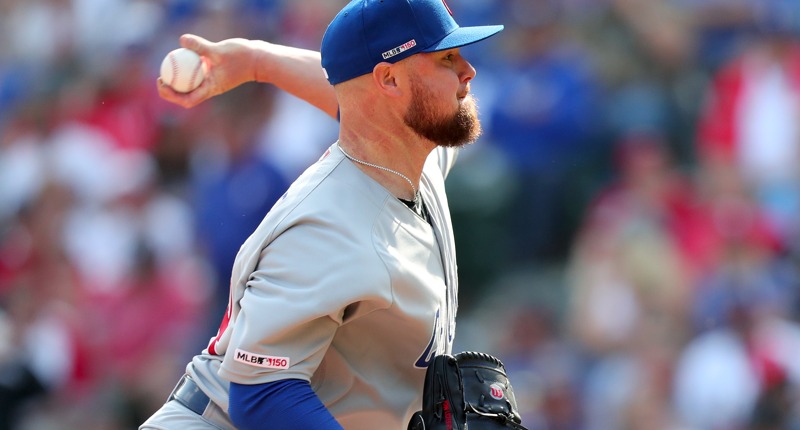 Not to be lost in yesterday’s offensive onslaught was Jon Lester’s perfectly solid 2019 regular season debut.

Elvis Andrus might’ve had his number (3-3, HR) for most of the start, but nobody else in the Rangers lineup did. The staff veteran and team leader needed fewer than 100 pitches to complete 6.0 innings of two-run baseball, allowing just four hits, two walks, and two earned runs along the way.

Although Jon Lester didn’t actually have his best stuff yesterday (more on that in a second), he was able to succeed nonetheless. In a weird way, that’s kind of Lester’s superpower. You can sum up his entire 2018 (All-Star) season that way, and that’s actually one of the reasons the Cubs signed him in the first place. He just knows how to pitch with whatever’s working for him that day, against whatever peculiarities in the lineup he’s facing that day.

That’s a good quality for a veteran who, although he has a diverse repertoire, is pretty clearly dealing with declining velocity.

Here are the specifics: Lester maxed out with a 92.1 MPH fastball yesterday, but he was routinely working in the 88-90 MPH range, especially early on. According to Brooks Baseball, his fastball actually averaged 90.1 MPH throughout the start, which is a mile and a half lower than his 2018 average (91.6). For reference, Lester averaged 91.8 MPH in 2017 and 93.1 MPH in 2016, and his fastball was around 91 MPH in April of last year.

Unsurprisingly, Lester’s cutter was his most effective pitch of the day, netting five whiffs, but it’s his changeup that’ll be our immediate focus today.

For his career, Lester has used his changeup roughly 7.8% of the time, but yesterday that ticked up to 11.2%. The difference isn’t as big when you consider last season (9.2%), but that has been trending upward over the years (8.4% in 2017, 5.5% in 2016). Notably, Lester was going to his changeup against fellow left-handers with a much greater frequency (14.13%) yesterday than he did last year (6.27%). And although that’ll be an interesting thing to track this season – perhaps he really will become more changeup dependent – it may have been more of a one-time, circumstantial approach.

“It’s a weird match-up team for me, just as far as what I usually like to do,” Lester said of the Rangers, per Jordan Bastian. “I threw a lot more sinkers and a lot of cutters today, as opposed to the four-seam and cutter. I had to mix that up. I didn’t have a curveball at all, which I thought leaving Arizona I’d be able to find that. And I didn’t have that.” Bastian caught up with Lester after the game and confirmed that Lester didn’t have a feel for his curveball, which is perhaps why we saw more changeups than usual.

He continued, explaining his approach against the southpaws: “Those lefties, for whatever reason, it’s just more of kind of sinker-based guys,” Lester said. “Their strength is down, out over, and that’s where I’m trying to go more times than not. We had to make that adjustment. And like I told you guys in spring, it’s a lot easier to pitch when you have a game plan and areas to go to.”

I will be very anxious to see Lester’s velocity improve as the season goes on, but it’s always encouraging to see him succeed without it. He’d be the best version of himself when he’s in that 92-93 MPH range – not only for the success of his four-seamer, but the rest of his arsenal that play off it – but that’s probably not something we can count on in his age-35 season. Even still, Lester has shown an impressive ability to adjust mid-game and I believe that skill will be the true key to his success in 2019.

The Rangers might not be the most formidable lineup he’ll face this season, but that was a great start for Lester and a great sign for the Cubs.