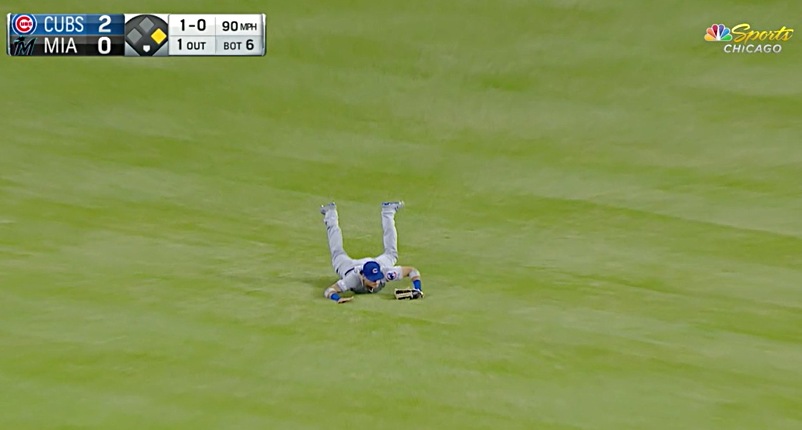 Albert Almora is 0 for 6 so far in Miami this week, but he’s 2 for 2 in center field when it comes to making stellar catches.

On Monday, it was a 121-foot sprint deep into the gap to track down a ball I thought he had absolutely no chance at, and last night it was a diving stab on a ball that was an obvious single off the bat:

That was 105.1 mph off of Starlin Castro’s bat, and hit at such an angle that it’s a base hit 92 PERCENT OF THE TIME.

But Almora reads it perfectly and immediately, commits to going for the catch – that’s such a critical part of making these plays, having no doubt in your mind that you can get there – and then gloves it. With a runner on base and the Cubs up at that time by only two, that was a huge play. Heck, if he dives and that ball gets by him, the game is tied.

It’s been a really, really rough start to the year at the plate for Almora, but the glove has been right there at the top of baseball:

Defensively, though, he's still stellar, tied atop the leaderboard in baseball for outs above average and catch probability added. https://t.co/4XRYc5Yru1 pic.twitter.com/z9vNdahqeT