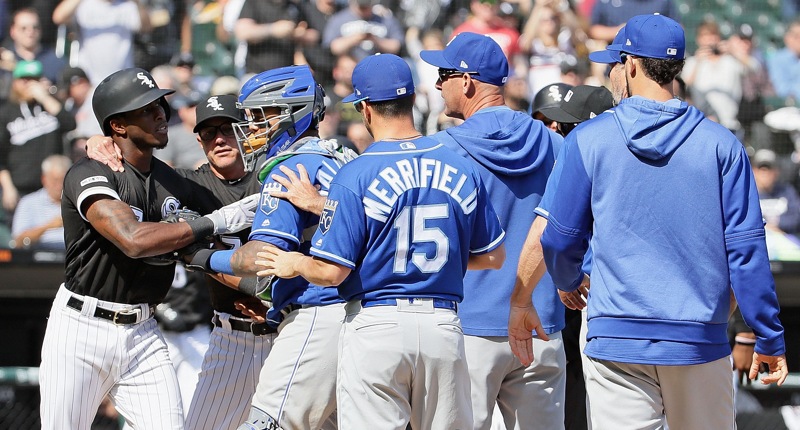 The White Sox and Royals were involved in quite a dustup yesterday, which then reverberated around baseball, and brought back up the age old questions of how much pimping is too much pimping, and what retaliation – if any – is appropriate.

A lot for that particular moment at this point in the season? It’s a pretty standard home run, so yeah, even I would agree that was a bit much. Gotta save something for the big dingers. In my mind, though, the response should be to have a discussion about whether that was too much, whether Anderson therefore looked silly in this instance, or whether there was context there that we didn’t know about.

The response shouldn’t be that the next pitch he sees is chucked at him:

“Fun in baseball is not allowed. We have to yell at each other, because he flipped his bat because he hit a home run. Why don’t you just get him out?”

The Royals, of course, were supportive of the decision to throw a rock at a batter because their feelings were hurt by his bat flip (MLB.com): “When you do something like that [a bat flip],” Royals third baseman Hunter Dozier said, “you kinda know you’re going to get hit. Once you get hit, just deal with it. Go to first. That’s my take on it. Keller did the right thing. He aimed for the lower body. Hit him. It should just be like ‘OK, go to first and move on.’”

It’s amazing how sometimes a pitcher can’t even throw one in the entire strike zone, but when it comes time to plunk a batter, suddenly he’s William effing Tell.

Royals bench coach – and former Cubs manager – Dale Sveum blamed the scuffle on Anderson for not just taking his base: “I’m an old-school guy and if you just take your base, everything will be fine.” MLB should really think about what Sveum is saying here.

Oh, but by the way, the pitch was TOTALLY an accident:

Brad Keller says he didn't see or hear anything Tim Anderson did or said after his homer or getting hit by his pitch. "The ball got away from me." #Royals pic.twitter.com/VE8GOfSGb5

For his part, Tim Anderson is not apologizing for having fun:

Tim Anderson said he’ll continue to play hard, keep it fun and give fans what they want. pic.twitter.com/vphzNsfjAu

… and calling out dopes:

What would Tim Anderson have done if the roles were reversed, if Keller homered off him and did a bat flip at the Royals dugout? Anderson: “I would have tried to strike him out.”

The craziest thing is people talking about respecting the game and acting like they’ve done it before and drilling batters … because they’re so soft that they can’t handle a guy flipping his bat after a homer. Toughen up. Worry more about your next pitch to the guy and less about the last crappy pitch of yours that he obliterated.

In the end, I think Reds pitcher Amir Garrett put it perfectly:

My take. He batflips cool. You take it to the chin and wear it. But next time you face him. Strike him out, and do whatever you gotta do. Fist pump, moonwalk, cartwheel. Do whatever. I’m all for it. Both ways. lol