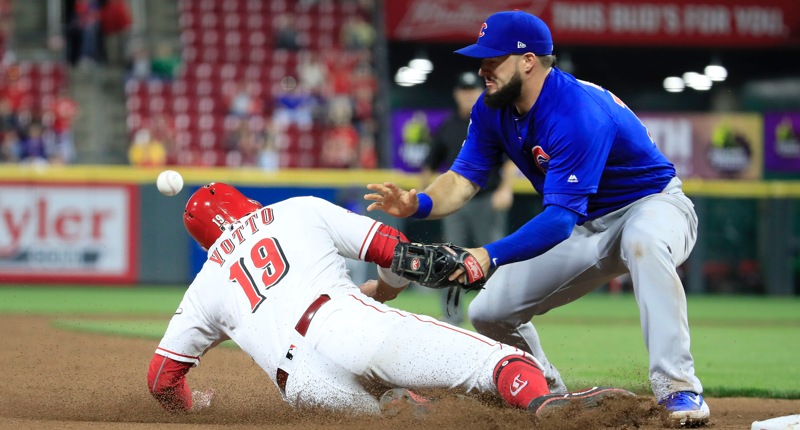 The last time the Chicago Cubs lost a series, Richard M. Nixon was president, you could get your shirt pressed for a haypenny, and dinosaurs still roamed the vast plains of the Dakota Territory.

Early April was so very long ago, you see.

The last series the Cubs lost wrapped up on April 7 in Milwaukee (where, hey, taking one of three against that home offense is not too shabby). That was 40 days ago. That’s more than 1/5 of the entire baseball season. And the Cubs did not lose a dang series for that entire time.

Appropriate, perhaps, that after 40 days and 40 nights, the rains came, and the Cubs finally lost another series.

What that means, on the occasion of them finally losing a series, as they did last night to the Reds, is that you’re going to feel especially perturbed – you’d temporary lost this headspace – and you’re going to be especially inclined to describe *THIS* series as the *ONE* that was just inexcusable to lose. The Reds! THE REDSSSSS?!?!?!?

I get it, and I don’t blame you. Go off. It’s been a really long time since you got to do it!

I’ll agree, too, that blowing Wednesday’s game sucked. I know it happens sometimes, but it is way more frustrating to me than the Cubs losing last night in a game started by a guy who might win the Cy Young in Luis Castillo (btw, don’t look ahead on the schedule at the other guys the Cubs are facing this weekend … ).

But I suppose, that’s some modest comfort? The first series loss in 40 days came on the road, against an actually-not-that-bad team, and required the bullpen blowing a late lead AND the other team walking it off in 10 (AND no Anthony Rizzo against a bunch of righties who are much worse against lefties). That could be more of a reason to be frustrated – it was so close! – or more of a reason to feel heartened that even with the Cubs not playing at their best, they were so close to taking this road series.

Given the last 40 days, I say what the heck … GO WITH ANGER! You never know when you might get the chance again, because I still reckon this team is pretty darn good.