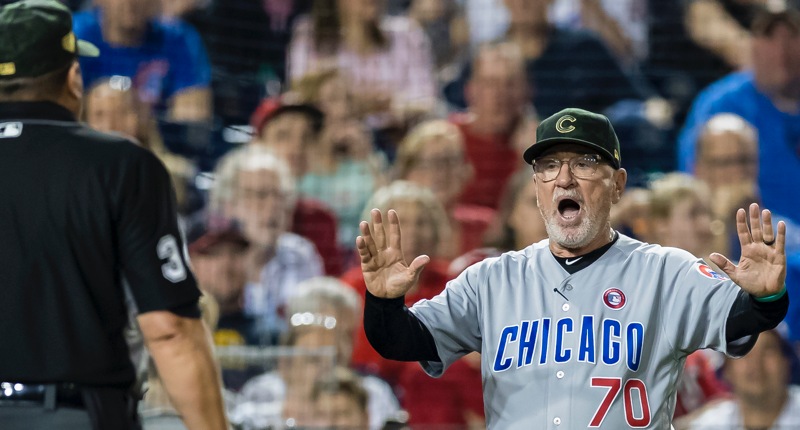 Washington Nationals closer Sean Doolittle entered last night’s 5-2 win over the Cubs in 9th inning, set to close out an excellent Stephen Strasburg start. By the box score, he did just that without issue.

But what the box doesn’t show is the lengthy delay after Doolittle’s second pitch, as Cubs manager Joe Maddon took issue with Doolittle’s hesitation delivery.

As all Cubs fans knew immediately, although Maddon was arguing about Doolittle’s delivery in the moment, what he was *actually* arguing about was how his own pitcher, Carl Edwards Jr., got pounced on for having this kind of ground-touching hesitation in his delivery, and MLB told him it was illegal. Maddon was right to make his point in this moment, as the rules are kind of unclear and flabby, and it would make sense if there’s just a uniform rule about what you can and can’t do, vis a vis the ground.

Because of Doolittle’s toe tap, the Cubs finished last night’s game under protest. My guess on that front, by the way, is that regardless of MLB’s decision about Doolittle’s delivery (which was probably legal anyway), the league will determine it did not impact the outcome of the game and the loss will stay a loss. So don’t get your hopes up on that front.

As for Doolittle, who seemed bemused on the mound by the argument and is generally one of the nicest players in the game, was not impressed:

Sean Doolittle on Maddon/Cubs protest: “In that moment, he’s not doing anything other than rattle me. It was kinda tired. Sometimes he has to remind people how smart he is”

Doolittle said of Cubs protest: “it was a thinly viewed attempt to throw me off my game.”

On Maddon: “Sometimes he has to remind people how smart he is…he put his stamp on that one for sure.”

Well, that might make things a little awkward when the Cubs trade for Doolittle in July, AMIRITE?

In all seriousness, I get why Doolittle would be a little beefy right after the game, but I suspect after he hears a little more about what Maddon was actually arguing, on behalf of Edwards, it might make him a little more understanding. Moreover, if Maddon really wanted to get MLB’s attention on this, calling out another player during a game he’s involved in is really the only realistically productive way to do it.

All that said, what Doolittle was doing last night is not the same as what Edwards got called out for. You may recall, although Edwards was initially doing a barely-noticeable toe tap in Spring Training, what he did when the season started was a MUCH more noticeable stop in his delivery:

Here's a look at the Carl Edwards Jr. hesitation delivery from Saturday, which features an (illegal) full-on stop, plant, and then deliver. It has to be a little more smooth than this, as he was properly doing in the Spring. pic.twitter.com/ECDZ6Ce85k

We don’t know exactly what MLB told the Cubs was illegal about Edwards’ delivery – touching the ground at all? or the full-on stop? – so Maddon might have all the more reason to be angry in this situation. (His comments after the game do *suggest* what they were told is that any toe tap is illegal.)

After the game, crew chief Sam Holbrook suggested it was the difference between that Edwards delivery and what Doolittle was doing that they were leaning on (Cubs.com): “[Maddon] thought [Doolittle] was tapping his foot, which in itself is not illegal. And this all kind of stems from his pitcher being called on something that was a little bit different than what Doolittle was doing. So in our judgement, Doolittle did nothing illegal at all.”

My read of the rules has been the same – you are allowed to kinda pause, but you can’t make such a pause/ground stop that it looks like a “second step” – but that really does underscore Maddon’s main point, which is that this should be much more clear. How much ground-touching is too much? How much pausing is too much? Why leave it up to discretion when you could just craft a rule that more clearly explains what a pitcher can and can’t do?

In the end, I don’t think Doolittle’s delivery is illegal under the current framework, but I do think Maddon was doing the right thing – not just to disrupt Doolittle, but to stand up for his player (and Edwards told Cubs.com he appreciated it). If he said nothing at all about another reliever doing what he felt his guy was doing, what kind of manager of people would he be?